This location is for Registered Users Only.
Perhaps you need to login or register.
Contributor: silly calvin
Website: www.twitter.com/ALVY_aaa
A simple film halation filter/effect primarily for sRGB and Rec709 footage.
Requirements:
12.0 or later
Windows 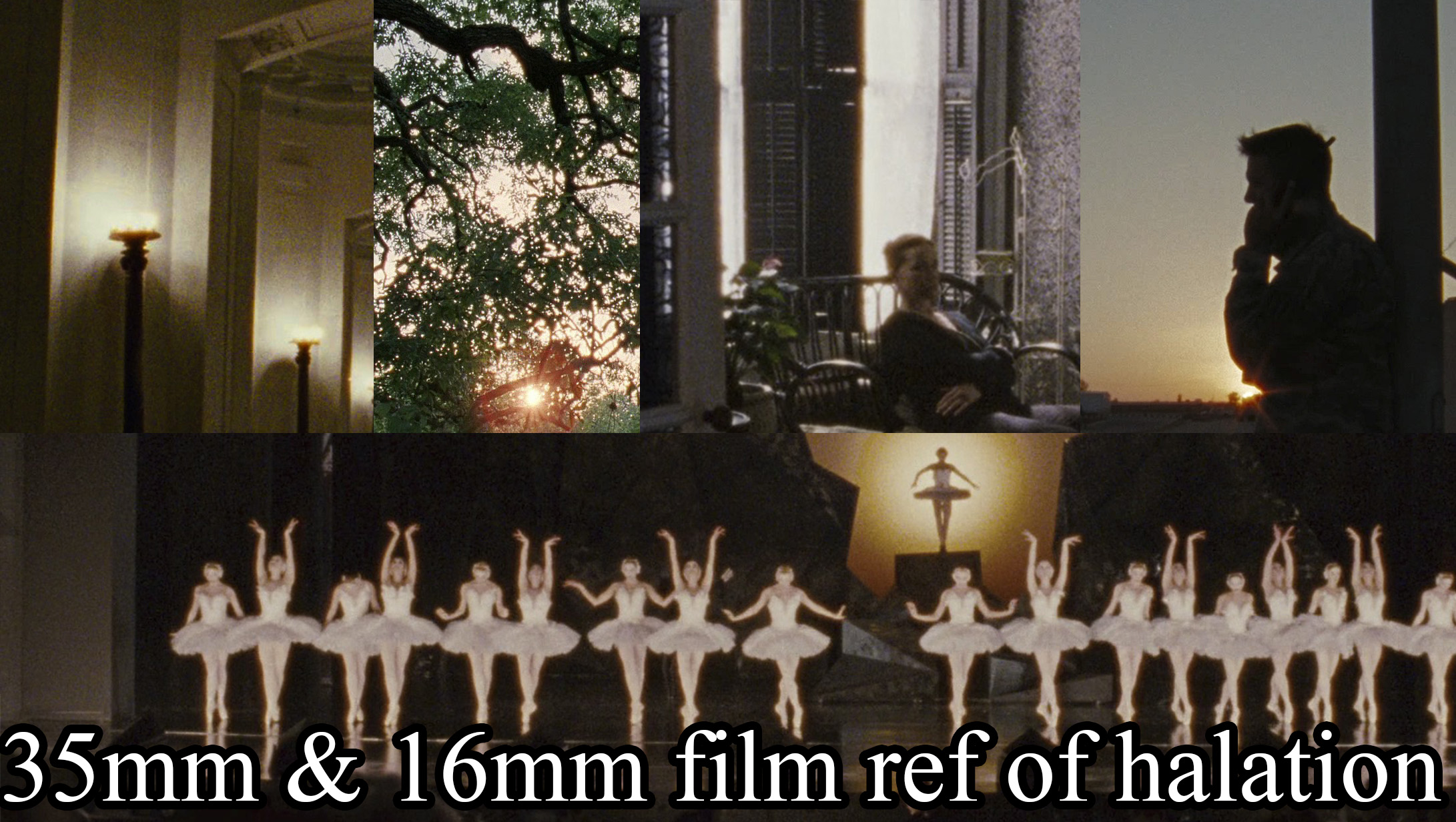 This gizmo is a simple film halation filter/effect primarily for sRGB and Rec709 footage. Film halation is a characteristic of celluloid film/film stock when a bright light basically manages to bounce back a few times from a bright light exposing the film a second time only affecting the red layer of the film and then a bit of the green one resulting in a reddish/orange glow and is often desirable for when emulating the 'film look'

I learn new things every day and I've done so starting from early 2019 up to now. To create a decent working, efficient and simple method of emulating film halation. I update this ever so slightly every day so I might update this gizmo a few times on this site. This, of course, is by no means the best method but I'd like to contribute something small from me to something bigger than me.

I've found other methods of doing this on the internet. None for nuke but some for resolve. I didn't feel comfortable working between resolve so I decided that I would have to try to figure out a way to do this in nuke which would please my workflow.

Steve Yedlin has been my main inspiration for this. Yedlin has spent more than 10 years of his life on film emulations/studying it and has worked in movies such as Star Wars and Knives Out where he uses his methods, though he doesn't cover how to do it, he rather talks about it in a philosophical fashion. 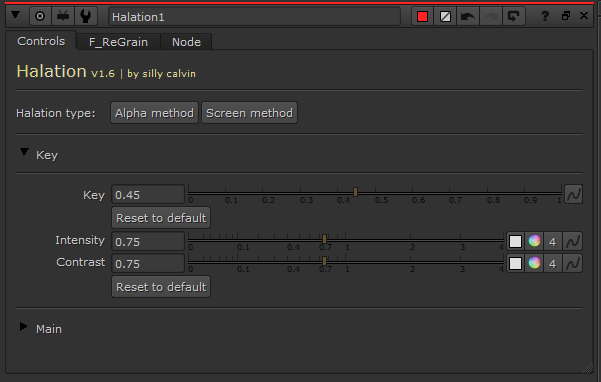 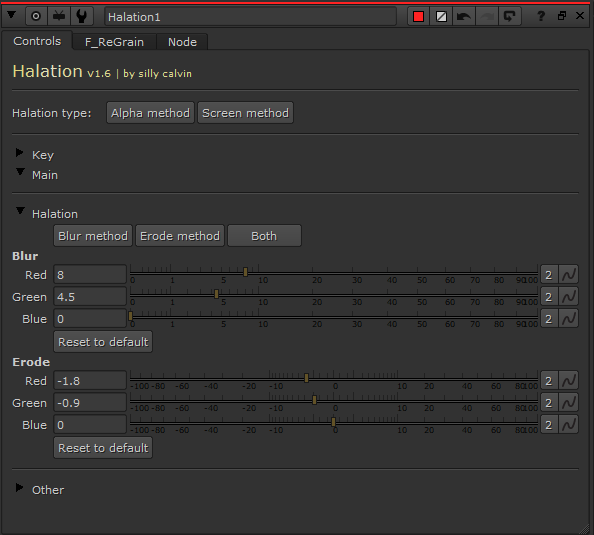 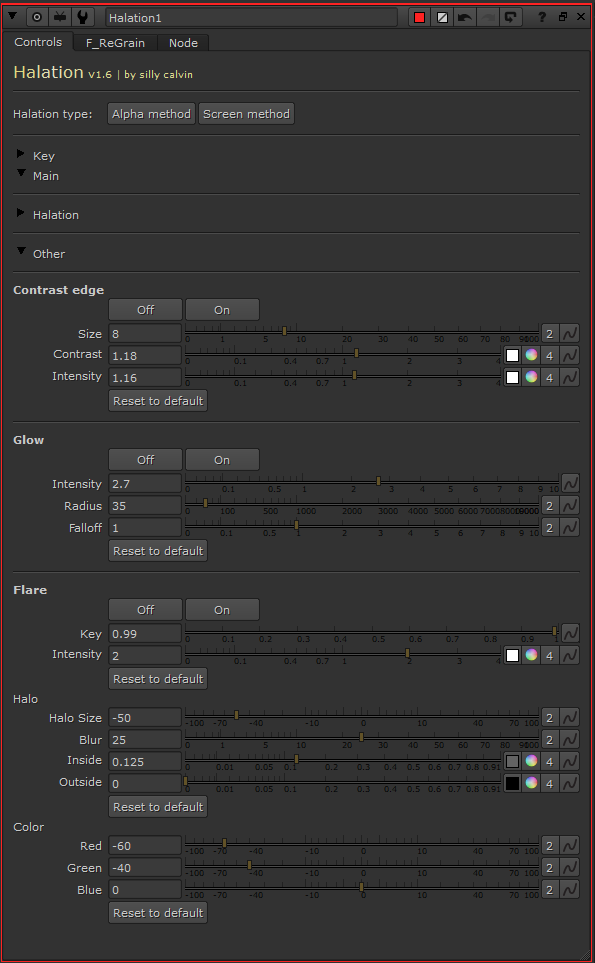 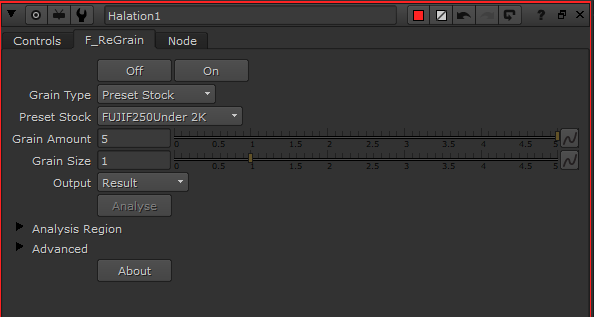 This new update adds a new feature called 'Flare' under the 'other' section which adds the ability to add a red halo/blob around flares which happens in film caused by halation. This update also fixes some small issues with contrast edge and I've tried to clean up the nodes in the gizmo and optimized it a bit more by removing unnecessary junk and replacing it with a smarter method.

Example of the halation 'flare' down below:

Updated the UI so it's not as flooded and doesn't take as much space as before by making tabs collapse by clicking on the black arrow.

Added Glow and fully migrated the pre-existing F_ReGrain as a new tab.

The new Glow will as the name of it indicates, add a glow to the halation which can be controlled to your preferred way.

The new grain tab functions the same as the original node does and as expected only controls the grain for the halation.

I also tweaked the UI a little bit to not confuse the user as much.

Fixed a major bug where the new contrast edge feature would not work.

Fixed some minor bugs and added adjustments for a smoother workflow.

Bad and good news: Unfortunately, I haven't yet managed to figure out a way of fixing the issue where if you're working in ACES, nuke can't find colorspaces outside the current OCIO config. For now, you'll have to either somehow merge the default nuke OCIO config together with the ACES one (doubting if this even works) or temporarily use 'Screen method' instead of 'Alpha method.' An interesting side effect of this issue is that ACES renders the halation in a rather interesting way. When I tweaked the screen method to work with ACES I discovered that when tweaking with the erode parameter the erode blur seemingly has a lot more pronounced ray looking halation than when working in nuke's default color space. I find this to be a lot more realistic.

So, for now, the people that are working in ACES will have to use the Screen method instead but with a bit more natural-looking halation in my own opinion.

Added also two halation methods one being the default 'Alpha method' and the other new one being 'Screen method' which uses both blur methods only but has a softer look to it.

Added a new feature being 'Contrast edge' which adds the possibility to include a white edge to the halation. I have yet to find any good information about this artifact but I've noticed it personally in a lot of movies and thought it'd be neat to add it as a little feature. From what I've seen it seems to occur when the film is overexposed and somewhere in the pipeline the process of pulling down the blown-out parts somehow introduces these artifacts. 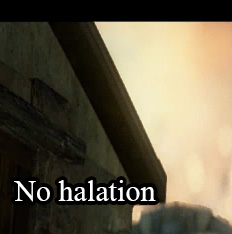 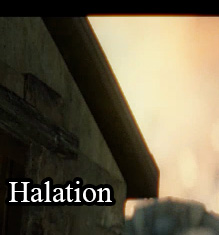 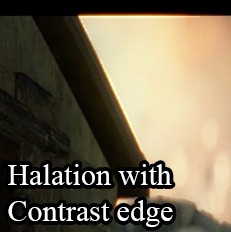 Made changes to the UI and added a feature where you can switch between blur or erode. This affects the way the halation 'glows'

I migrated the Regrain node into my gizmo so it would be easier to match an already comped plate with grain. This is by no means the perfect way of doing it but it will easily solve that issue I believe.
Refresh comments list
RSS feed for comments to this post