Who is FX Elements and what services do you provide?

Via our website www.fxelements.com, visual artists can browse and preview FX clips, buy one, or a few of them, for immediate download or buy the entire FX Collection Vol. I. via hard drive delivery.

What are your respective backgrounds?

Lucie and I met in the Graduate Film program at Florida State University. We studied production together and worked often as a team in cinematography or post-production.

We moved to Los Angeles after graduation and Lucie freelanced as a camera assistant since her emphasis was in camera work. I, on the other hand, had experience in Post Production and Producing and I was fortunate to get a Post Production Assistant position on the television series “24” for seasons 6 and 7. While working at “24”, I was moonlighting as a freelance VFX artist and I eventually decided to leave the show to dedicate myself completely to freelance VFX work.

Over time I convinced Lucie to join me and together we worked with Wes Ball and Justin Barber at Oddball Animation over the next several years. We worked on a multitude of projects ranging from paint and roto to feature film compositing to TVC compositing and motion graphics. Even today we still do some VFX work from time to time, but FX Elements is now our priority.

What inspired/motivated you to start FX Elements?

We’ve been RED camera owners for years now – originally a RED ONE, now an Epic – and from day one we used the camera to shoot random bits of stock footage (general themes, the likes of which you can find on the major stock footage websites). We actually thought about building our own site to sell our stock footage as raw R3Ds. As a team of two though, the task seemed daunting! At the same time, as we were doing our VFX work, we often ended up shooting our own elements because we couldn’t find what we needed anywhere. Yet we somehow didn’t immediately put 2 and 2 together and it was actually Wes Ball who suggested that we should focus our website idea on FX related stock footage. His suggestion seemed so perfect for us that we decided right away to dedicate our stock footage website to visual effects only, and we’ve never regretted it since.

What sets FX Elements apart from other stock footage libraries?

There are two main differences, one is our delivery format: we offer the actual uncompressed R3D files via the FX Collection hard drive. The other is that we offer individual shots (we call them FX Clips); most other providers require that you purchase an entire collection when you might only need one or two shots.

Moreover, we try our very best to frame the elements with compositors in mind. In other words, we try to keep the elements in frame as much as possible because we realize that as soon as an element breaks frame, it’s no longer usable (at least not in most cases). That said, there are some elements that will always break frame, no matter how hard we try to stop them – smoke for example – but in general we do our best to create usable elements and we try to be very discriminating when choosing which takes make it onto the site and which takes are discarded.

How long have you been running FX Elements?

Technically the site has been live for 18 months, but we released the FX Collection Vol. I hard drive only one year ago. So we’re still pretty young and have plans to add much more content over the coming months and years.

We had to slow down our shooting schedule last year in order to focus on the functionality of the site (the actual web design and development). Now that the site is in good shape on that front, we are shooting new content every week. We are in the process of sorting through the best shots and building FX packs for the next FX Collection Volume. And thanks to our customers’ awesome suggestions, we still have a long list of effects to shoot! Blood is first on the list. 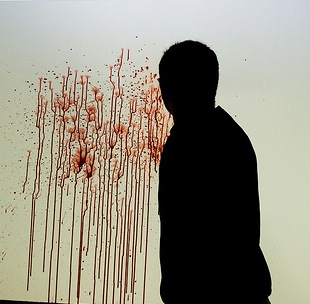 For some more behind the scenes photos go to  http://www.flickr.com/photos/fxelements/

What equipment do you use? Camera/Studio etc?

We used a RED One MX to shoot everything included in the FX Collection Vol. I. We’ve since upgraded to an Epic to shoot Vol. II. 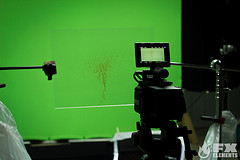 We shot most of Vol. I over a black background (black velour) both indoors and outdoors. For Vol. II, we moved into a nice studio space with a large green/blue screen. Right now, we are shooting blood effects over green and will probably shoot many more elements over green (or blue) in the future. We’re happy with our new set up which allows for a finer level of control.

Blood is really difficult to capture in camera, so we are also in the process of creating some CG blood effects;  this way, we can offer both options to compositors. I’m currently testing simulations via RealFlow and so far I’ve been impressed with the quality of the results. Moving forward we’ll probably try to do more and more CG elements simply because there are some things we can’t shoot practically, a nuclear explosion for example!

Shooting elements must be fun, I mean blowing up stuff and making a huge mess and filming it all. Any anecdotes along those lines?

You’re right it is fun and it tends to be really messy! I think the worst (and probably funniest) circumstance happened when shooting the seemingly innocuous “smoke breath” clips. I’m not a smoker, but neither was anyone else on hand that evening, so I was selected by my wife Lucie as the designated cigar smoker that night. Needless to say I probably went through 2-3 (cheap & disgusting) cigars in the process of capturing what you now see on the site. Nausea was lurking... And if the cheap cigars weren’t bad enough, Lucie, who is quite meticulous, demanded that I held the smoke in for several seconds, so the air would be clear at the beginning of each take. It worked, but I’m not sure we’d use that process again. I was so sick that night!

What quality of footage do you offer?

Considering our delivery format (ProRes 4444, R3Ds), the quality of the RED technology and our attention for details, we like to think that we offer the best quality footage available, however I suppose it all depends on your particular needs. We try to put ourselves in the compositor’s shoes but of course we can’t predict every possible way the footage will be used. When you’re shooting elements for a specific shot in a specific film, you can take into account the camera angle, the lighting, etc., but for us we have to try to pick the angles and lighting that will be the most universally useful.

I find that element libraries are only ever as good as the software that allows artists to browse and find stuff quickly. Any thoughts on this?

I’m really excited about the recent release of HieroPlayer. I’ve been playing with a copy for a little while now and it really is great. To organize the FX Collection Vol. I shots, we were using The Foundry’s Storm, but unfortunately, they discontinued the product. So now I’m very excited to see most of Storm’s features in HieroPlayer, but with added Nuke and Hiero interoperability.

In theory it could be expanded further with some Python coding, unfortunately I myself know next to nothing of Python, but hopefully someone will take up the challenge.

We also encourage our customers to continue to use the site as a tool for searching and previewing clips. Having a tool like Hiero or HieroPlayer is definitely the fastest way to search or browse through your local files, but since we have previews for all the clips available on our site it can also work as a decent solution.

Do you offer discounts for student and/or independent filmmakers?

We currently don’t have a discounts framework setup, but that is something we’d like to offer in the future. In the meantime, we encourage visitors to fill out our “user survey” for which they’ll receive a $20 store credit. In addition, we give away a free clip each month for download. Anyone interested in further discounts can also contact us via email or twitter and we’ll try to find alternative ways to help out whenever possible.

Are there any particular elements you always wanted to shoot but haven’t been able to?

We always wanted to shoot blood effects and – as I mentioned – we are finally getting to it. It’s messy and sticky, but not only that, it’s honestly one of the most difficult elements to capture in camera, so we still have plenty of trial and error ahead of us.
Once we’ve mastered blood elements, our next mission will be water effects since we haven’t been able to tackle those yet either. We’ll probably utilize the same workflow, some practical, some CG.

Can people contact you to suggest particular types of elements for future shoots?

Do you use your own product for creative projects?

Absolutely! Some of the first elements we shot were dirt hits that we used right away in a war film named Chittagong which we were working on at the time. Since then, we’ve used our elements on multiple other projects. This year, we’re hopeful that we’ll be able to get back to our production roots and make a short film... If so, we’ll most likely use tons of our FX Elements throughout the film!