In this last part of the Shake to Nuke transition, I'll go through the different categories of nodes in Nuke, and outline some of the biggest differences you may find coming from Shake.

For a full description of the available operators/nodes available in Nuke, the user manual is the best reference available. If you come from Shake, there's a useful table of equivalences between Shake and Nuke operators in Appendix C of the user manual (p. 1101). You can always check this 'oldie but goodie' compilation by Hugh Macdonald:

In this guide, I won't go into the details of the correlation between Shake and Nuke nodes, but will try to go through the different groups of operators (I/O, filters, grading, etc) and for each category cover some common tasks in Shake that have a different approach in Nuke, or point out some differences that are often a source of confusion for Shake users when jumping onto Nuke.

Nuke's Read and Write nodes work quite similarly to Shake's FileIn and FileOut. The main difference (and a big one indeed) is that Read and Write nodes can handle colorspace conversions themselves. This is usually confusing for many users coming from Shake, but if properly set up, you can forget about converting colorspaces back and forth 99% of the time. I strongly recommend some further reading to understand how and when conversions are taking place inside Read and Write nodes, but once you do, you can safely rely on them doing the right thing and only manually override their behaviour if something goes wrong (for example, if you're loading images that don't comply with the rules set up for the conversions)

Apart from this difference, some Shake users tend to miss the retiming options they have in SFileIn nodes. Nuke's Read nodes don't handle any timing operations other than setting the first and last frame of the image sequence (and a field to set an expression to handle what file is read on each frame). For time changes, including time offsets, retimes, freezing a frame, frame blending, etc... it is better to use separate Time operators.

Nuke is a lot more powerful than Shake when it comes to handling time changes in your script.

In Shake, your options for time manipulation were pretty much reduced to the timing controls inside each SFileIn, and the long dreaded TimeX node ;-)

In Nuke, there's time operators that can be introduced at any point in the script to offset, freeze, or retime the whole tree above the time operator.

This is indeed very powerful, and a painless way to offset parts of the tree that contain animated controls, or split off multiple branches of the same tree, each having different time offsets. However, keep in mind that this will effectively force the whole tree above to be calculated once for every frame that is requested, so if you're splitting off multiple branches, or doing something like a frame blend (where multiple frames need to be computed to produce the result), you might not want to precomp your input anyway first, specially if that portion of the tree is heavy to process.

Every compositing software has its own collection of filters, and people are used to just play with them to get familiar with the results. Nuke should be no different. You'll recognize most of the filters you can find in Shake, plus a few of its own.
However, there's a couple of things worth mentioning here, since they're not necessarily obvious:

This is a very extense chapter in Nuke, but an important one to learn coming from Shake.

Check out this tutorial about channels and channel operators in Nuke, by Matt Leonard:

One of the most frequently asked questions by people with a background in Shake is: do grade nodes concatenate in Nuke?
Short answer is "No, because they don't need to".

Long answer: Nuke does all grading operations using 32 bit float precision. So, there's no loss (or negligible loss in very extreme color corrections as a result of rounding), and all the data can be recovered by reversing the original grade at any point. And remember, Shake's grading nodes don't concatenate when used on float images either.

Some Shake users like using simple grading operators to split colour corrections into multiple, single-purpose nodes (add, mult, compress, expand, gamma…). While it's possible to use the same approach in Nuke, the Grade node offers a convenient way to group some of those simple operations into a single node. Speaking in Shake's terms, think of it as a group that contains an expand node (blackpoint/whitepoint), a compress node (lift/gain), a mult (multiply), an add (offset), and a gamma (gamma, huh!) in one node.

With the additions of Keylight (in Nuke 6.0) and Ultimatte (Nuke 6.1), along with the long standing Primatte and IBK Keyer, Nuke offers a great keying toolset.

Coming from Shake, you're most likely already familiar with Keylight and Primatte, so spend some time exploring Ultimatte, but specially the IBK Keyer, a very powerful yet often underestimated keyer.

Here's some resources to learn how to use the different keyers in Nuke:


In Shake's terminology, a Reformat can do the work of a Resize, a Zoom, a Window, a Viewport or a Fit node, depending on its settings. In fact, it can do a lot more than that, and you'll end up using Reformat a lot, so I recommend getting familiar with all its options and understanding what they do (the tooltips on each one of the knobs in the Reformat properties provide very good information on what to use them for). Just to get you started, here's a quick guide on how the aforementioned Shake nodes could be replicated using different parameters in a Reformat node: 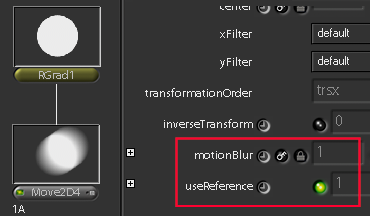 2d-tracking and transformations based on a track (matchmove, stabilize) are all done within the Tracker node (same way you can use a Stabilize node in Shake to do both the tracking and the matchmove or stabilize).

Tracking features in Nuke using the Tracker node works just like in Shake, but it's worth pointing out that, for 4 point tracks, Nuke does not do any cornerpinning when applying the transformation in either matchmove or stabilize modes. It will use all 4 points to calculate translation, rotation and scale, but not introduce any perspective changes to your images. If you need to do that, copy all the data from the tracker into a CornerPin2D node.

To use tracking data in a Cornerpin2D node:

Setting the 'reference frame' to frame 10

Tip: If you want to use tracking data on vertices of a Bezier or a Rotopaint Spline, you can drag & drop from the knob that holds your tracking data onto a spline vertex in the Viewer.

One of the most important things to know about Nuke's Merge nodes is that the B input is always the main branch/input. Read "Part III: Data Flow" of this guide for more info about this feature (http://www.nukepedia.com/written-tutorials/shake-to-nuke-a-transition-guide-part-iii-data-flow/)

Apart from that, you'll find all the Layer operations you're used to having in Shake under the Merge node in Nuke. Out of the whole list of Merge operations, here's a few that may be new to you coming from Shake, and others that don't do exactly the same even if they have the same name as their Shake counterpart. In most cases, the difference between operators of the same name will be small, and/or only happen under special circumstances, but it's good to know about them, specially if you are porting scripts/macros from Shake to Nuke and you experience slightly different results:

This is the end of this 4-part Shake to Nuke transition guide. Hopefully it will shed some light into the most obscure areas of Nuke, and make your transition a bit easier.