Timing changes can be quite a headache in most compositing packages.
Here's a few cases where the use of expressions can be of great help when dealing with time modifiers (frame holds, time offsets, time warps…)

1- Freezing an animation to a certain frame (FrameHold)

The syntax curve(frame) is one of the simplest and yet most useful ways to handle time within an expression. It means "take the value of this animation (curve), at this frame".
This can be used on any animated knob, but it's most useful on 3d operators, since one cannot simply attach a FrameHold node to them (yet).

Here's a very common scenario: you have a plate and a matchmoved camera and want to set up a projection based on a still frame from the plate. You can either make a copy of your camera and delete its animation to make it static at the frame of your choice, or use an expression to dynamically freeze the camera's animation based on a separate FrameHold, which you can later change if you wish to choose a different frame for your projection. 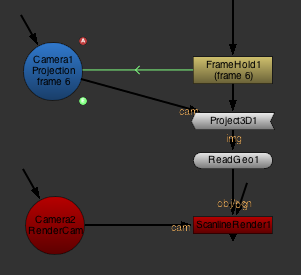 The above setup can be easily accomplished by using the following expression in any animated knob in the projection camera:

The same expression can be used in the label of the projection camera to show the frame being used at all times. Like this:

- Offseting an animation in time (TimeOffset)

This works almost identically to the previous case.
Let's say you have a camera that matches your plate. Now, in your comp, you're offsetting that plate in time.
You can still dynamically reference the animation of the camera by using a curve(frame+offset) expression. 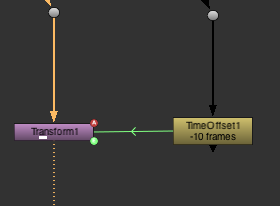 Again, using the same expression syntax, a retime curve can also be referenced so your animation is retimed the same way your footage is.

Here's an example using the retime data from a Timewarp node to retime the animation of a Transform node:

If you're using a OFlow or F_Kronos, you'll have to reference the "timingFrame" and "frame" knobs respectively, instead of the lookup knob.

Additionally, OFlow and F_Kronos can use two different methods to describe a retime: a lookup curve (source frame) or an overall speed.

If you want your expression to work correctly regardless of the method used, you could include a condition so it handles both methods. This way you can work on your OFlow or F_Kronos as you like, and make sure your animation curves carry those changes live.

Here's how the expressions would look like for all three kind of nodes: 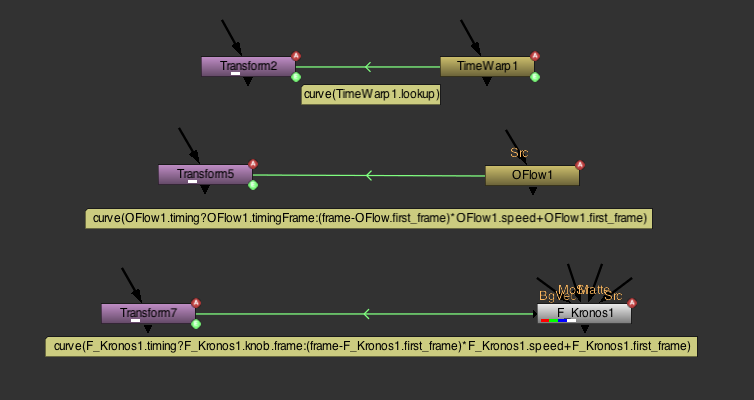 Say you have a retime curve you need to get the inverse of. For example, you animated (or tracked) something to an already retimed plate, and now that retime has changed. Ideally, you'd want to un-apply the first retime from your curve, and then apply the new one.

There's at least 2 ways in which you could approach this:

The derivative expression can be very handy for motion graphics, or in any scenario where you'd like to animate something depending on the "speed" of an animated curve.

Imagine you have a retime curve and you want to do some creative grading as your clip slows down/speeds up. Or, you have tracked an object (a magic wand, for example), and want it to get brighter the faster it moves. Or, you're animating a wheel, and want it to rotate faster the faster it moves across the screen. You get the picture. In all of these cases, the derivative expression can be of great help.

How to use it: 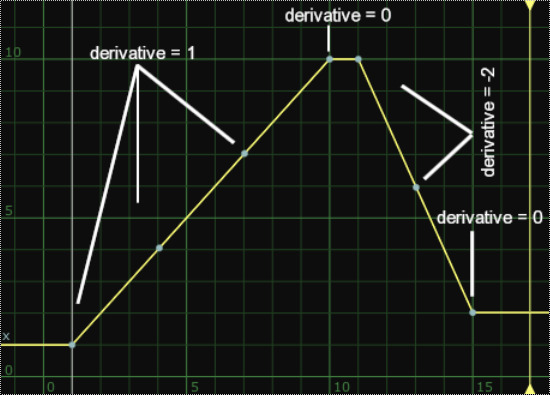 It is then up to you to use those values on any other knob, and modify them as needed (normalize them, scale them...) so they're suited for your purpose (rotation, color correction,...).

The derivative expression can take 2 optional values, with the one of the following syntaxes:

- frame is the frame we're calculating the derivative for. Default is the current frame. You could use something like curve.derivative(1,frame-5) to get the first derivative of this curve with a delay of 5 frames, for example.

- Finding the average of a curve (integrate expression)

Say you have a curve that produces a flickering effect. Something like this:

Now you want to know the average value of that curve between frames 0 and 100. You can do so using an expression with the following syntax:

This would calculate the integrate of a curve between 'first frame' and 'last frame'. The result would be the aggregate of values between the 2 specified frames, or the area below that slice of the curve. So, dividing that by the total number of frames, we get the average value. Using the above curve as an example, the expression field would look like this:

+4 # behram patel 2010-10-09 03:49
the most simplest & practical explanation of a derivative in any CG related material i have ever read.
Huge thanks to you Ivan

0 # Aled Rhys Jones 2011-03-23 11:02
Although I now know derivatives, how do I apply it? my example is a 1pt track and I want the x value to affect the rotation of the object I'm attaching to it.
How would I write the expression into the Rotation given that my input would be "Tracker1.track1.x"?

Just a little note that I haven't yet learned expressions with Nuke, though I did use them quite a bit with After Effects.
0 # behram patel 2011-03-25 00:33
Hey Aled,
Try
translate.x.derivative()

but I have a question.

Is there a way to connect time offset and switch?

concrete:
I have time offset node at frame 35 and i want my switch to be 0 until then, and to 1 at frame 36
Is this even possible?

I'm not sure I understand the question, but here's a couple of tips that might be what you're after:
To have your Switch node switch from 0 to 1 at frame 35, you could use an expression like:

Is that what you were looking for?

Thanks for fast answer!
Yes that it exactly what i was looking for. It works like i need it.

Once again thank You very much.

There's a couple of things you could do:
You can create a TimeWarp node that matches your ping-pong retime. You would just need a keyframe on the first frame, another one on frame 100, and one last one on frame 199, mapped to your first frame again. Then, in your tracker, you would just use one of the example expressions above (look under "Retiming an animation" to see how you can use a TimeWarp node for that)

Alternatively, if you want to manually set up your expression, it should read something like this:

The expression to set it up manually would read like this for your case:

curve(frame
0 # Ivan Busquets 2012-04-11 12:13
Ok, so something is weird with the comments system, where typing certain characters cuts the message at that point.

I am getting: "nothing is named "Oflow1.speed""
I assumed this is because I am using the Frame timing method as opposed to using an input Speed in my OFlow node.

is it possible to extract the Frame where the key was set on a cuve? i would like to link the key frame from a nowhere curve to a frame hold..

Have a look at the tcl command for animation in Help/documentat ion/Tcl Scripting/Nuke tcl commands
0 # Shahin Toosi 2016-01-21 20:49
Quoting Frank Rueter:

thank so much dude, I'm looking at this now, the manule is starting to give me a headache! animation y1 will give the the 1 key frame, iv looked at the la and ldy but they don't seem to update when the when the slider animated am i doing something wrong!
0 # Frank Rueter 2016-01-21 20:52
animation y 1 will give you the value of hte second key (index o is the first key). the animation command is a bit of a challenge. what exactly are you trying to do?
0 # Shahin Toosi 2016-01-21 21:00
basically i have no idea how to articulate it!

trying to connect the the key frame (in x) of animated curve from one knob to a nothre!

e.g. if you got a mult that got 5 key frame for example at frame 1,25,50,100 to connect dose to a frame hold for example! so when you animated the frame hold number updates!

if this makes any sense!

p.s. im getting the feeling that your starting to peas to gather how this is as how badly my spelling going!

haaaaa! that one is it the tic was a lot closer to what i was trying to do!

let me past the example.

But where can we find ANY more documentation on Nuke expressions that the tiny amount in the manuals?

The Foundry have made a laughable stab at documentation for their expression engine. They simply don't mention many of the commands you use above. They don't mention conditionals.

This is incredibly frustrating for software this expensive. Even Adobe provides vastly better documentation.
Refresh comments list
RSS feed for comments to this post