This location is for Registered Users Only.
Perhaps you need to login or register.
Contributor: Max van Leeuwen
Website: www.maxvanleeuwen.com/nuke-breakdown-maker
A breakdown tool that plays the video during the breakdown. Create a complete breakdown with one node.
Requirements:
11.0, 10.5, 10.0, 9.0, 8.0, 7.1, 7.0, 6.3, 6.2, 6. or later
Linux, Mac, Windows

There are other tools to create breakdowns of your shot, but they all seem to lack the feature of playing the video during the breakdown.
I created my own tool, called Breakdown_Maker, which has this option and more features like it. For example:

- It automatically places the beginning and end of the shot before and after the breakdown;
- It assumes the correct frame ranges;
- The possibility to export the same frame range for multiple inputs (the Loop mode);
- The original shot can be played (and go back to start with a rewind effect) before the breakdown begins;
- Supports up to 40 inputs. 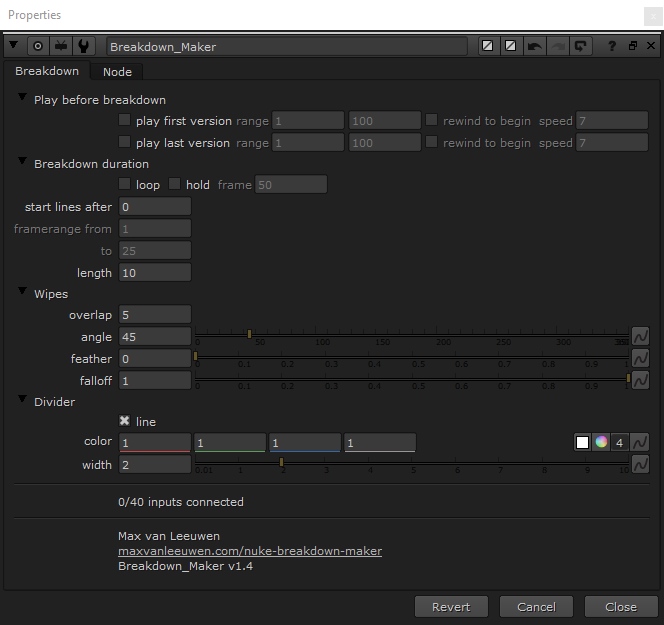 Feedback would be greatly appreciated, as this is the first nuke tool I ever built! Thanks!

-Play last version
Play the final version before the breakdown has started (useful if you have a 'reverse' breakdown: starting with the final shot and going back to the original footage by removing layers) – set the frame range for the duration of the final shot with the textbox next to it

-Rewind to begin
If you have one of the 'Play before breakdown'-checkboxes enabled, this will animate the time (with the Speed parameter next to it) so the shot rewinds itself before the breakdown begins

-Loop mode
When enabled, it doesn't create a breakdown – it renders all inputs sequentially without wipes, so you can use other software to create your breakdown
(e.g. export frames 0-50 for 15 different inputs)

-Start lines after
Offset the breakdown
(e.g. play the first 50 frames, then start your breakdown at frame 51)

-Framerange from
If loop is enabled, choose the starting frame for the input loop

-Framerange to
If loop is enabled, choose the end frame for the input loop

-Hold
Choose to play or pause the video during the breakdown
(e.g. play first input up to frame 51, hold at 51 and start breakdown, resume playing last input after breakdown)

-Length
How long each input is visible

-Overlap
How long the wipe is visible

-Angle
The angle of the wipe

-Feather
Feather of the wipe

-Falloff
Falloff of the wipe

-Line
Show a line over the wipe

-Color
Color of the line

-Width
Width of the line

v1.2
Fixed a frame range bug that occurs when both Start and Hold are enabled