This is a QC tool for checking roto-mattes or and other kind of mattes. It works with all formats(format is grabbed from the input), meaning if will work with app spect ratio's, including anamorphic plates.

The node has these QC options: overlay of red, green, or blue, Stencil from plate, premult against BG (grey, checkerboard, or custom color). It's set up in a way so all the user needs to do is pick the QC mode from a dropdown menu, and the rest is hadled by the gizmo, including alpha handeling. For color overlay  the user can control the opacity with a slider. The node is stackable and alpha will carry through so you can have as many of these nodes you want and the alpha will still be correct.

version 2.4 Update:
Added another QC mode to the dropdown list.

check core for holes: this is an expression that sets the alpha to 0 if the alpha value is below 1, making it easier to see if overlapping shapes are giving you holes in the core of your matte.

version 2.3 Update:
node is now stackable. you can view both red, green, and blue by stacking the nodes together.
The alpha will carry through in stacked nodes (checkbox 'keep matte in alpha channel' needs to be checked for the alpha to carry through).

added bbox, making it a default option to keep the bbox from the rgb's pipe input.

added pipe alpha throug option: this will disable the modes and show the raw rgb as output with the matte copied into the alpha channel.

python callbacks on the mode-dropdown menu makes the node changes color so its easy to see what mode its in.

version 2.1 Update:
Added invert matte option. Added to have the ability to easily invert the matte in overlay mode.The checkbox does not affect other modes, as it did not make sense to have it inverted on permult or stencil modes. 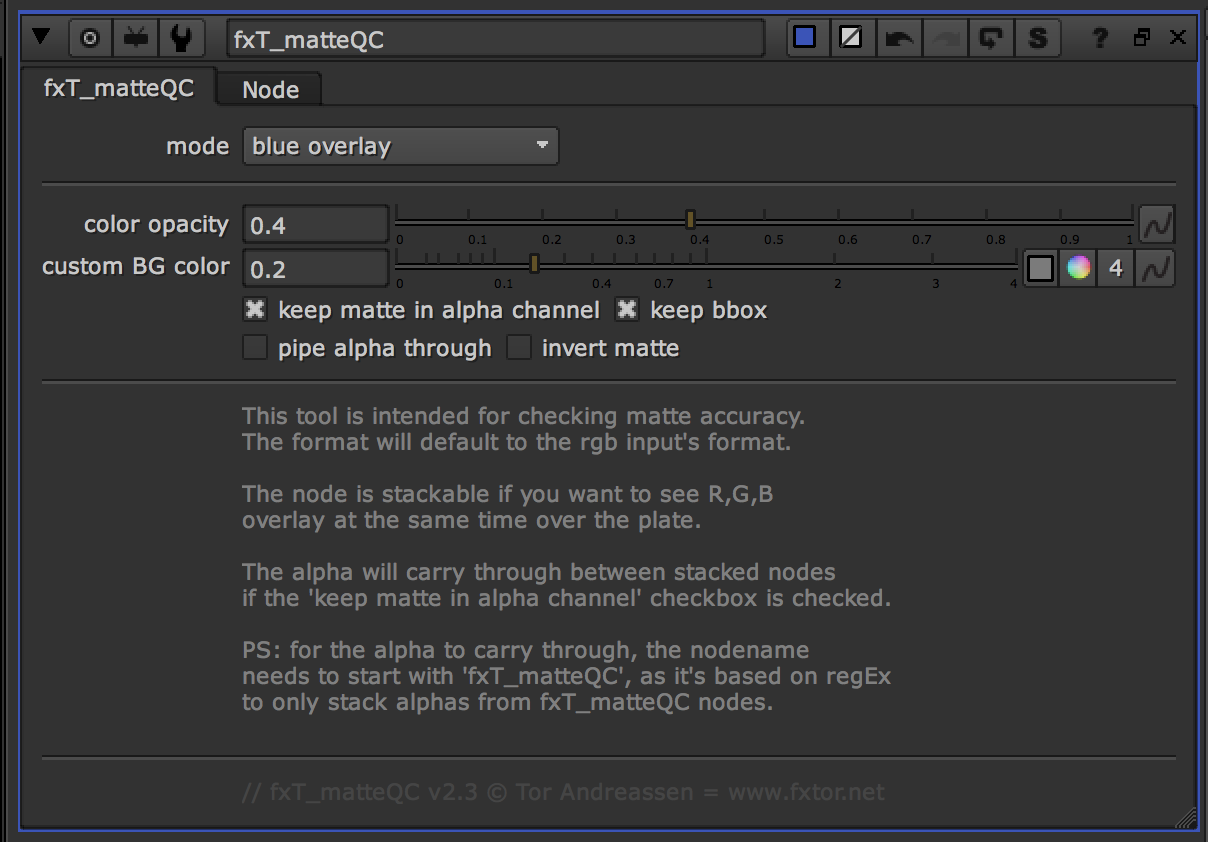 To install the Gizmo in it's own nuke menu with the attached menu icon:  please see attached 'init.py' and 'menu.py' files.
Install the Gizmo and icon file according to the paths in the 'init.py' file, or alternetivly change these paths to your own preferred install location.

Sure I know it's easy enough to add my own but since you've added so much already.

If I am getting what you are after correctly; the dropdown option 'stencil from plate' does a similar thing. This option lets you see easily if the matte covers the whole Image or if left over pieces need to be added to the matte. I'll add your requested invert matte on the next release - no problem.
0 # Tor Andreassen 2016-08-14 13:10
Quoting Andrew Mumford:

Really wish this had a "Global" invert matte toggle.
..

based on what mode you use, the node will also chage color so its easy to see what mode is used in the node-graph.