This location is for Registered Users Only.
Perhaps you need to login or register.
Contributor: Max van Leeuwen
Website: maxvanleeuwen.com/nukeshared
Automatically load and install all kinds of plugins/scripts, simply by placing them in the right folder.
Requirements:
13.1, 12.2, 12.1, 12.0, 11.3, 11.2, 11.1, 11.0, 10 or later
Linux, Mac, Windows

NukeShared is an easy-to-use plugin manager for Nuke, which makes writing code to install plugins, gizmos, scripts, and any other kind of add-on obsolete.
Simply place the files to install in the right folder, and NukeShared will install them correctly in Nuke with icons, subgroups and much more.

Multiple NukeShared repositories can run simultaneously, they work on render farms, and they can be loaded from servers. 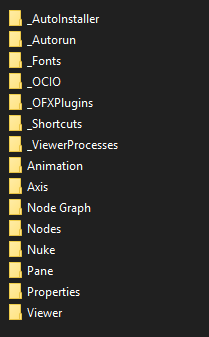 Adding some gizmo's and folders to this Repository in the 'Nodes' panel: 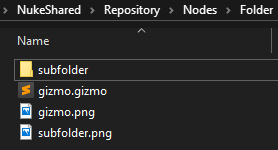 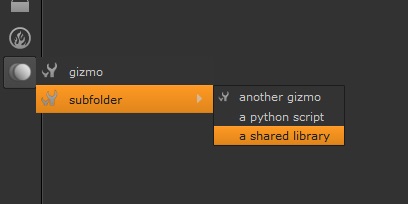 This works with all of Nuke's menus (the Node bar on the left of the screen, the Nuke menu on the top of the screen, and the six others: Animation, Axis, Node Graph, Pane, Properties, and Viewer).

Simply place all your .gizmo, .nk, .py, .dll, .so and .dylib files in the right folder, and they will automatically load in the right menu.
Add PNG files with the same names as icons (for plugins/scripts and for folders).

There also are folders for fonts, viewer processes, autorun python scripts, and there is an auto installer.
The auto installer folder installs plugins that require multiple files (e.g. Cryptomatte and PixelFudger) instantly. Just place the entire downloaded folder in there and it works.

1. Place the entire 'NukeShared'-folder somewhere you like. Could be on a server, if you want to have multiple computers load their plugins from it.

2. Add the following line to the .nuke/init.py file (change 'path/to/NukeShared' to the actual path on your computer!). Create this file if it does not yet exist.

The .nuke folder can be found here:

A clean update (downloading the new NukeShared and moving all your gizmos etc. to the new folders) is, of course, the best way to do it.

Another option is to overwrite the new 'init.py' and 'menu.py' in the Required folder, and check if there are any changes to folder names in the Repository.
I recomment using a folder comparison software (like Beyond Compare) to make sure the update is succesful.

Fixed option to skip loading .py files next to .gizmo files with the same name (a setting in Required/init.py)

Complete overhaul of the folder structure, which makes a lot more sense now (thanks to Ricardo Musch for his feedback!)
Added keyboard shortcut editor (in the _Shortcuts folder)
Added _AutoRun folder for running python scripts on startup
Added _AutoInstaller folder for plugins that have their own menu.py and init.py files (just drop the whole folder in there)
Added Nuke menu's: Animation, Axis, Node Graph, Pane, Properties, Viewer
Added _Fonts folder (if there are fonts in there, your default_font will be set to this path so the Text node sees the fonts)
Added _ViewerProcesses folder (add gizmo's here to make them Viewer Processes)
Changed the way the 'open this folder'-button works: it's not there by default any more, but it can be added to any folder now

Files like 'autoinstaller' should have extensions when working with Google Drive or other coud services, so this is now built-in
Added user logging functionality (which can be enabled in init.py)
Bit of cleanup on the script and readme

Fixed Mac compatibility (thanks to Marvin Sprengel for testing and feedback!)

hi, the script menu show well my python scripts but nothing happened on clic, any idea why ?
gizmos works well

Everything runs great on nuke 11.2.2 Mac 10.10.5
Just one question. To exclude users from certain folders with "ignore.dat" file do you add the username to the contents or actual name of the .dat file. for example "username_ignore.dat" or is it just "username" saved inside the file via something like text wrangler. Thanks again for making a great tool

So its an "ignore.dat" file with "username.dat" in the file and as the instructions say new user for each line.
+2 # Tony Lyons 2019-06-11 09:34
Really really love this tool Max, I've been using it a lot. Have you thought about adding a feature that acts sort of like the nukePluginMange r that Simon Jokuschies made:
http://www.nukepedia.com/python/ui/nukepluginmanager

It would be great to add that to the autorun so we could choose which plugins to load on startup. Even better would be a panel that lists everything loaded in the nukeShared system (different sections for different nuke menus?) and allowing you to toggle on/off things you want to load on the next login, and saving that to a .json file. Maybe even per user (in case the master is on the server and want core features to load for everyone, and then other plugins to be user preferences.). Maybe it's asking too much, but just thought I'd throw out the idea. Maybe a feature for version 3.0! Thanks again
+2 # li zhaohui 2021-02-23 05:13
nuke13 out of commission
0 # Max van Leeuwen 2021-03-28 17:49
fixed!
0 # li zhaohui 2021-06-17 16:34
Axis Folder content not loaded
0 # li zhaohui 2021-06-19 14:21
openfolderbutto n.dat，How does it work? It didn't work for me。
Axis The menu doesn't appear!
Others work normally
+1 # Wojciech Swiatkiewicz 2021-09-05 18:24
Hello Max. I have problem with yours autoloader. It cant load .py files correctly - it show in the menu but nothing happen when i click it. Like it was only show the name of a file but not "import" it like in traditional way. I work on win10 nuke v12.2v2 (btw gizmos load and work correctly) Hope you help me with this Max. Thanks!
0 # Adam Rothstein 2022-09-09 02:39
I am having a similar issue. I have some handy python scripts I'd like to load, but the _Autorun folder isn't working as expected. It doesn't look like it's compiling the python scripts in there. Like you said, @Wojciech, it doesn't look like the scripts are being imported on init. What do you think?
0 # Robin Roeske 2021-09-15 10:02
Doenst work with Nuke 13.0v4 INDIE, is that a restriction with the indie lic? The Error says its an Exception in the init.py file at lin 62.
+2 # li zhaohui 2022-01-12 08:47
_ocio It doesn't work
0 # Austin Brown 2022-04-02 01:33
Lovely tool! I wonder if you could possibly add some checks to how it assigns icons? Currently it's case-sensitive between gizmo name and icon name. Some gizmos I pull in have a slightly different capitalization in their icons and I have to rename them manually.