This location is for Registered Users Only.
Perhaps you need to login or register.
Contributor: Jeang Jenq Loh
Website: www.jeangjenq.com
Simple pop up interface to execute a node with terminal.
Requirements:
11.0, 10.5, 10.0, 9.0 or later
Linux, Windows

Here's a script I wrote that execute an executable node (available node class shown below) with a command prompt terminal on Windows instead of executing while you're working on the script. As you can imagine, I wrote this because I find not all the executable nodes can be execute as a background process. And that's basically what this script does. I found a few similar scripts that does similar function but mostly to write nodes only, and none of them have the simplicity I have in mind. 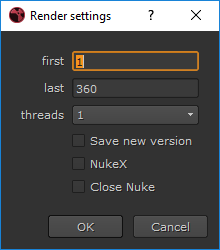 To install this put the file in your desired plugin folder and add line below to your menu.py

It is included in the script to add 'Execute using Command Prompt' in Render menu with a shortcut key 'F6'.

So assuming you're running it with ParticleCache node, when I tested it back in nuke version 10 it seemed like it's working. But now after a bit of test it appears that it is only reading the files, not writing them. Which is sad :/

Thanks for bringing this up! I'm removing particlecache from the available nodes in the next version.
# sebastian brown 2020-02-12 19:42
thank you very much for making this!!