This location is for Registered Users Only.
Perhaps you need to login or register.
Contributor: frank rueter
Website: www.ohufx.com
Save a node's knob values to "stores" and recall them at any time.
Requirements:
or later

This module adds the feature of saving node values in "stores", which then can be recalled either via the right click menu, or dedicated buttons in the new Store tab of the node at any time.

To install it, just drop the the python file into your nuke path and add those lines to your menu.py:

By default three stores will be created. You can change the amount of stores you get and also exclude certain knobs from being saved by feeding the respective arguments into the addStoresMenu() method:


Now launch Nuke and right click into the property panel of any node. 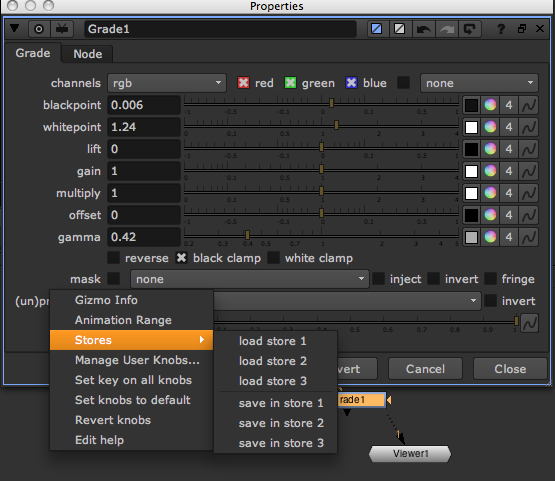 You can now save the current node settings to any of the available 3 stores via the "Stores" sub menu. The amount of stores you can use is customisable (see below).
When you save knob values to a store, you are prompted to give the store a label.

You can just hit ok or cancel to leave the store un-labelled.
The first time you save a store, the "Stores" tab is created in that node which holds the buttons.
Unused stores will have a small label in italics, used stores will use a bold font.

The label that was given to a particular store along with it's saved knob/value pairs can be viewed in the respective button's tooltip. 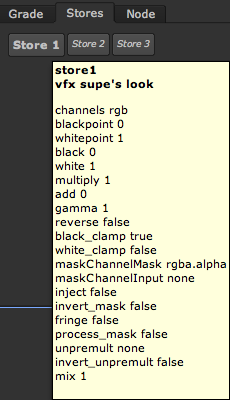 (Unfortunately a Nuke bug currently prevents the labels and toolsips from being redrawn immediately when a store is saved, but they will show up correctly after the panel was closed and re-opened.)

You can now either recall the stored values via the same right click menu you used to save them, or via the buttons.
The saved stores are baked into the node and independent of the python script that created them, so you can exchange nodes with other artists that don't have the python script in their plugin path.