When you work in a small company you have to constantly come up with fast solutions for tedious tasks, in this case tracking markers. I developed this workflow while working on a 1000+ frames plate where a marker was constantly intersecting with the actress's hair.

This technique lets you easily remove tracking markers from backing screens without the hassle of painting, even when they intersect with the foreground elements. The idea is to make them very close or identical in some cases to the backing color.


It works in most cases, but after some testing with different plates I found that there are scenarios where it won’t go smoothly and you’ll need to consider alternatives.

This is the easiest case, where the markers are only visible in 1 channel. 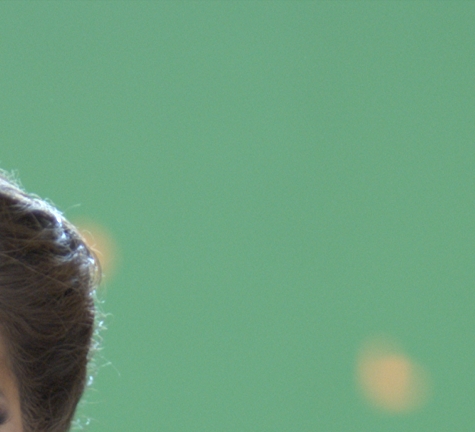 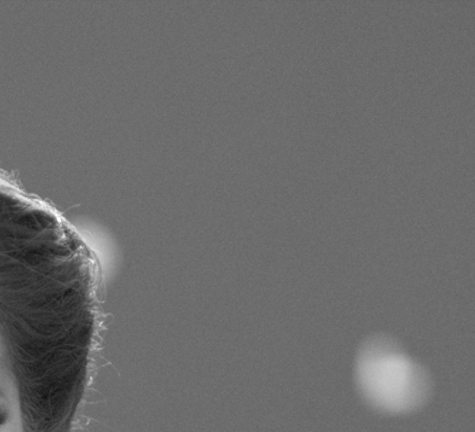 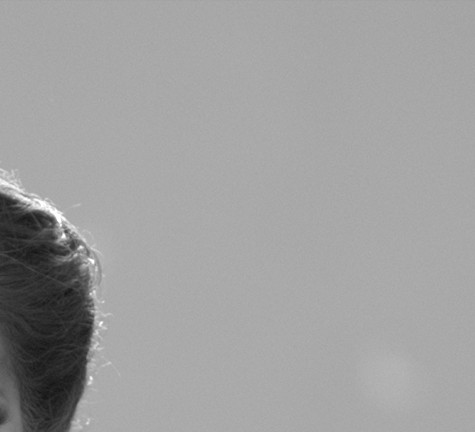 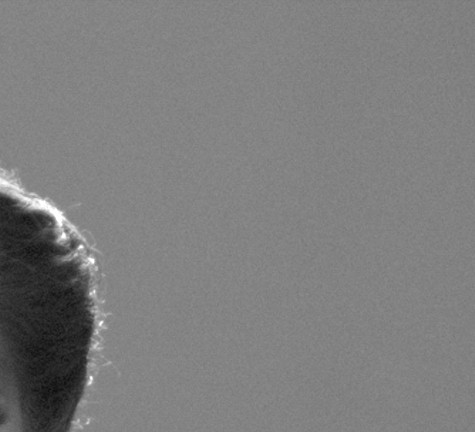 Our first target here is to make sure the marker is mostly visible in one channel and blended or not seen at all in the other two. We start by making a rough mask around our markers and animate the shapes if needed. Keep this matte on the side for now. 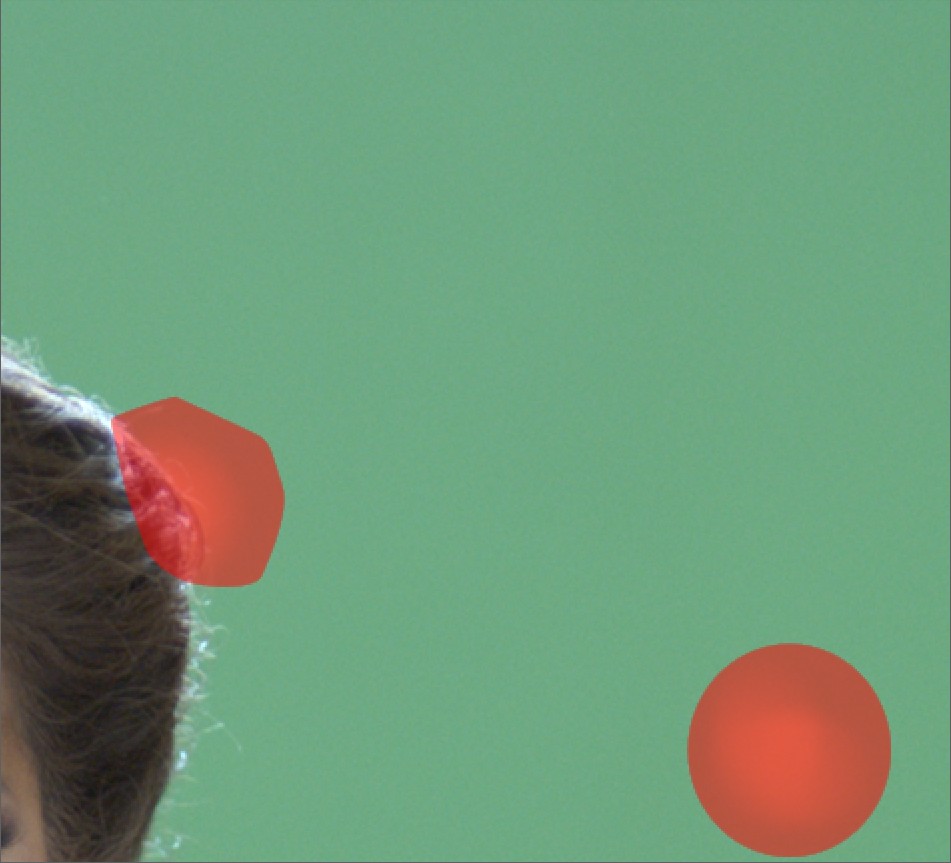 In this example we have orange markers on a green screen and the markers are dominantly apparent in the red channel only. Put a shuffle node and replace the red channel with the blue channel. 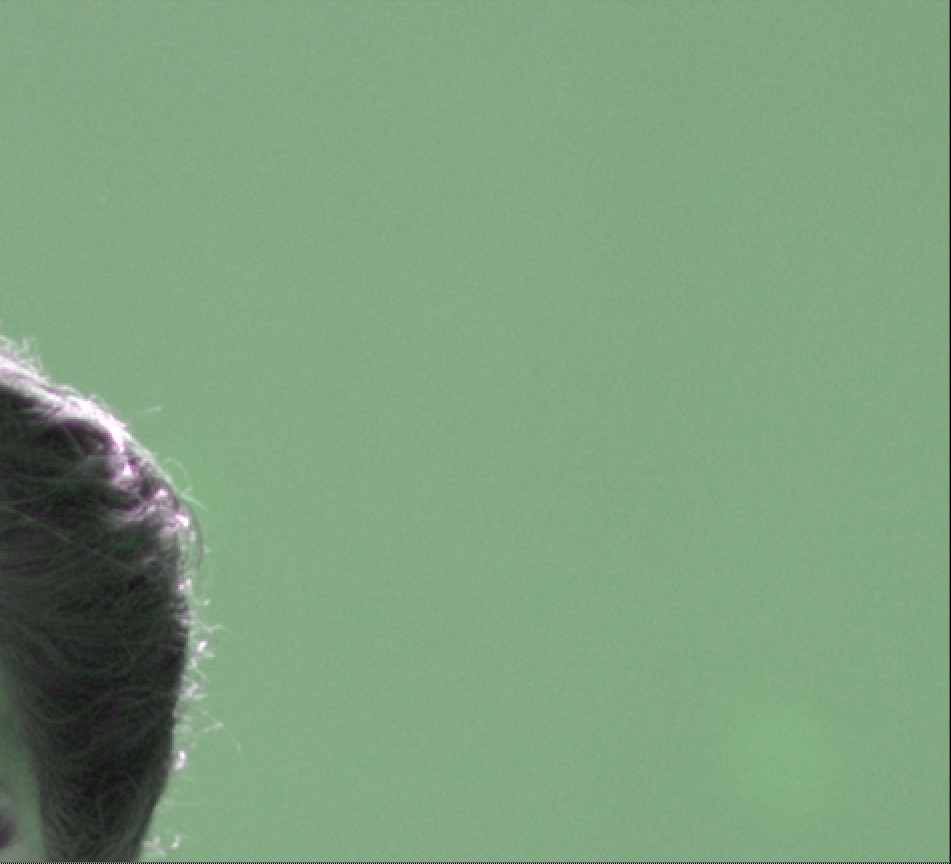 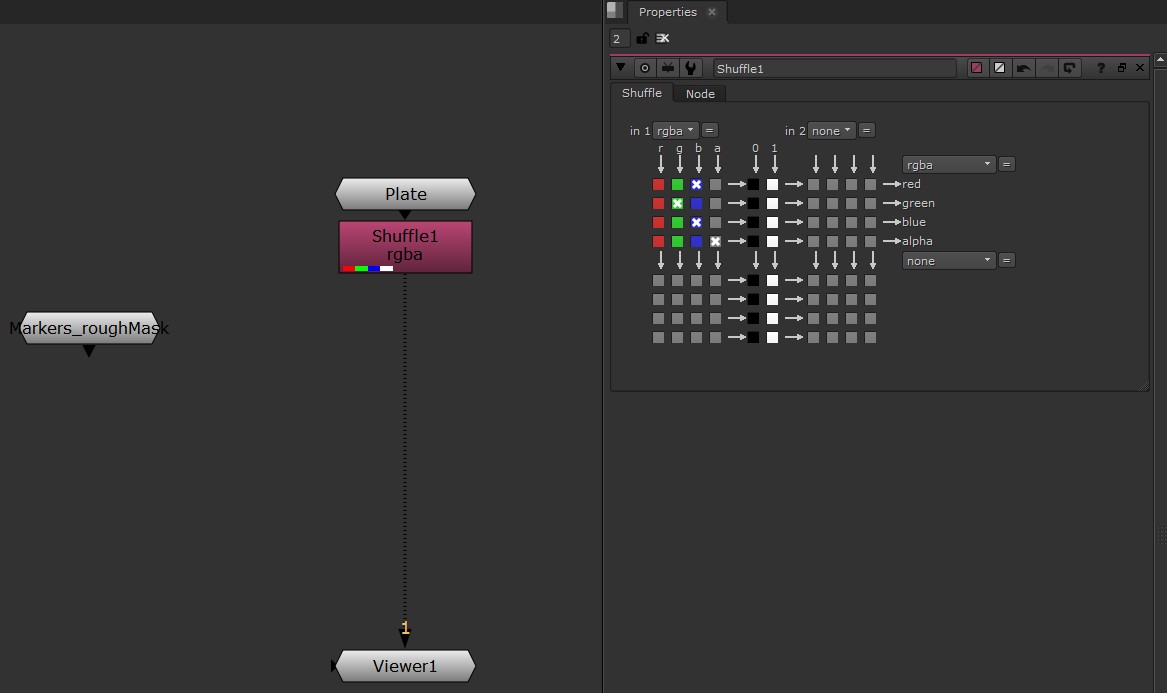 Notice how now the markers have disappeared, but also obviously all the plate colors shifted. The screen color shifted slightly and our foreground subject turned greenish. Put a grade node and let’s grade our new red channel so that the screen color matches our original plate.

Use a wipe viewing only the red channel to accurately match them. In the grade node either split the gain control and only change the red knob or just uncheck the green and blue channels. 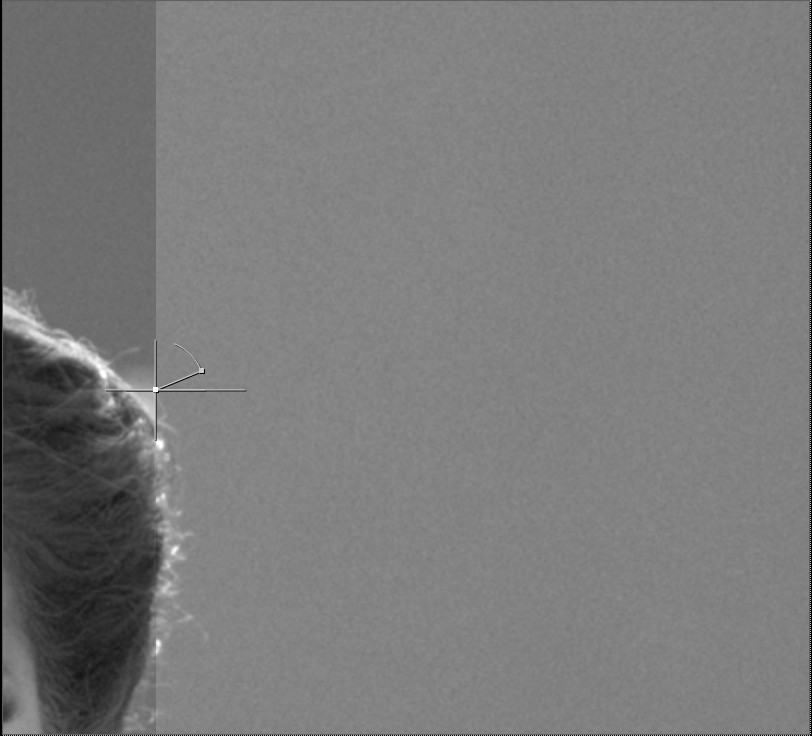 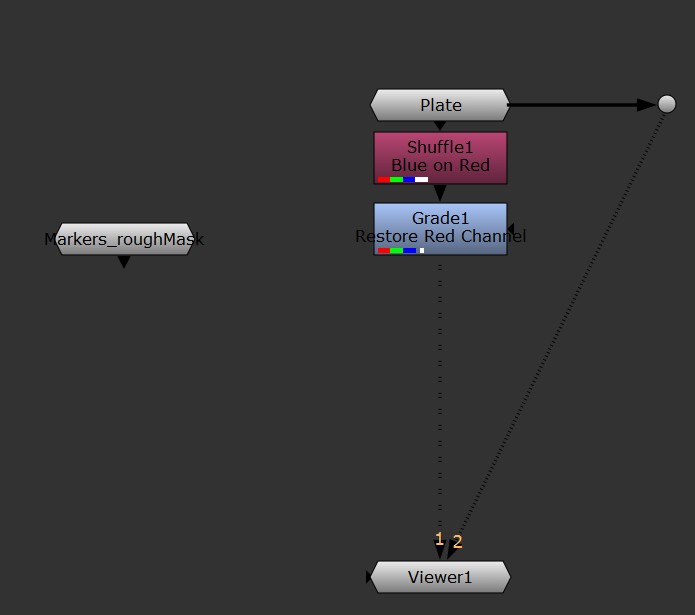 Now the screen color is back to it's original state but still our foreground subject needs work. We need to restore her colors without affecting the green screen. 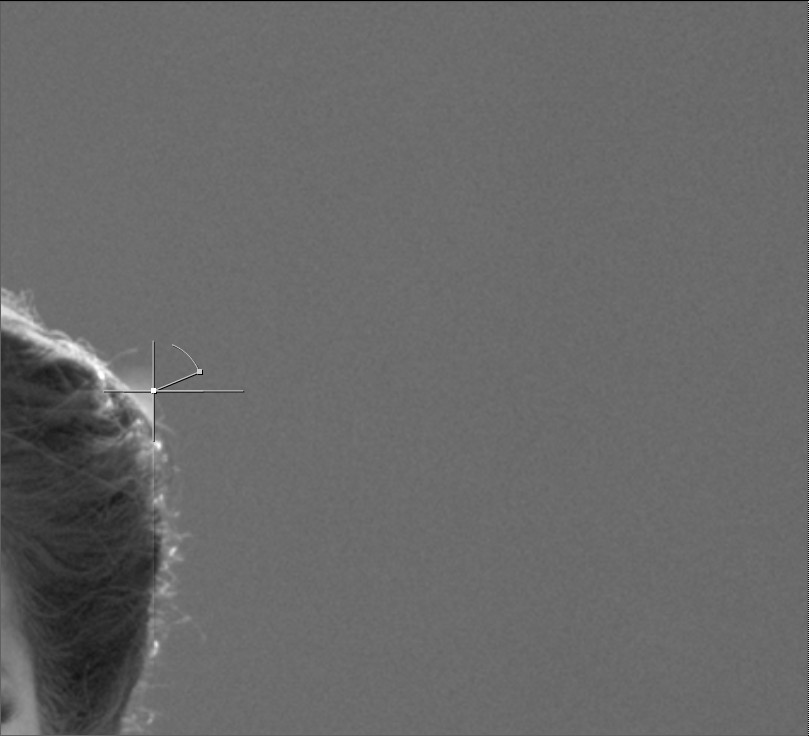 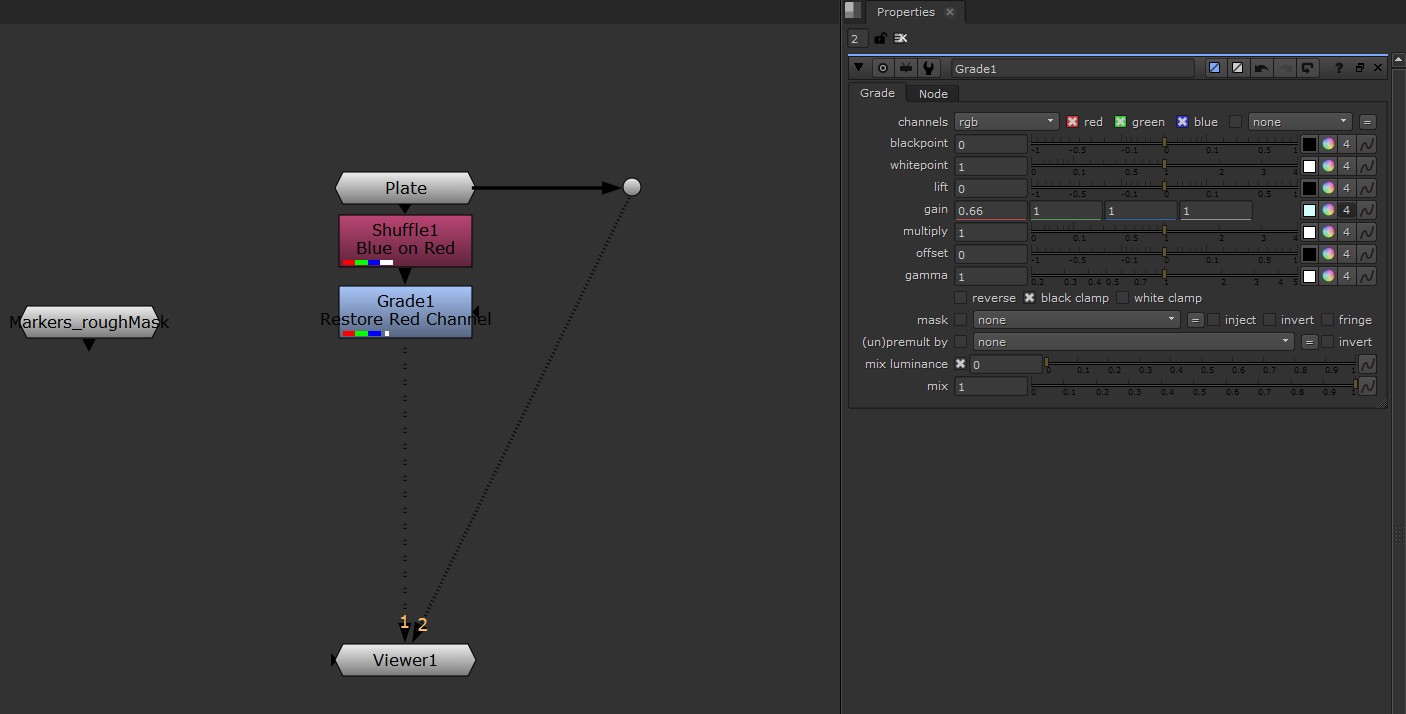 Copy the marker’s rough mask in and premultiply then merge this over the original plate. 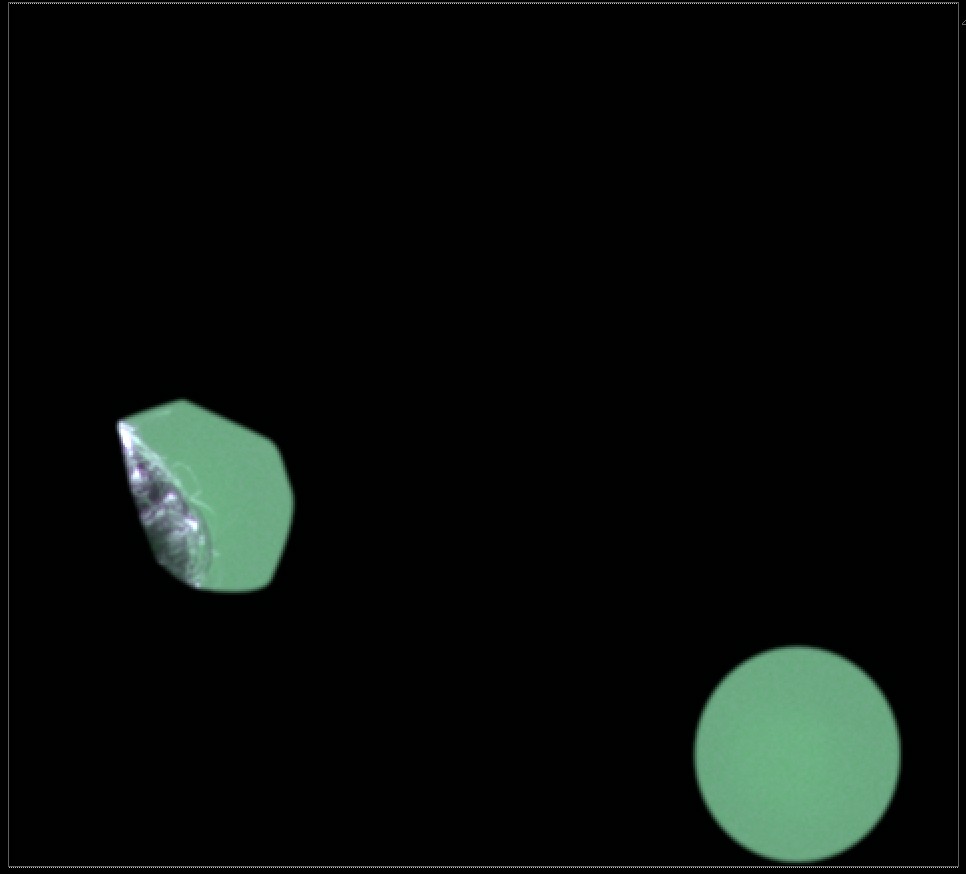 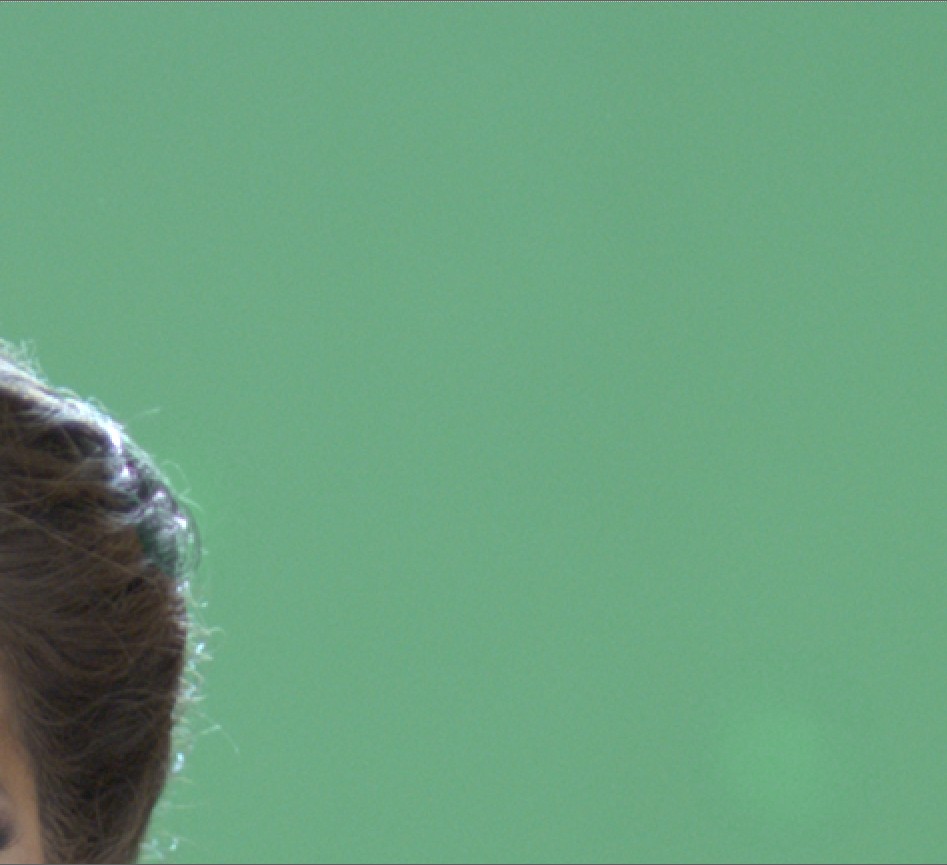 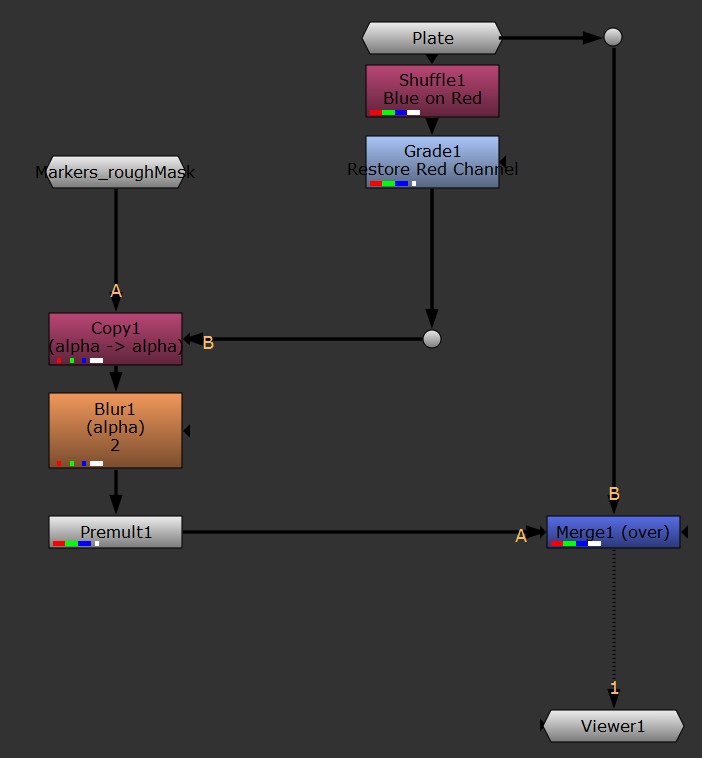 This makes our problematic area just limited to the rough mask we prepared earlier. We now need to isolate the foreground subject so we can stencil it from all this mess and since we now have a marker free green screen that becomes easy.

Drop in a keyer node and pull a quick matte. 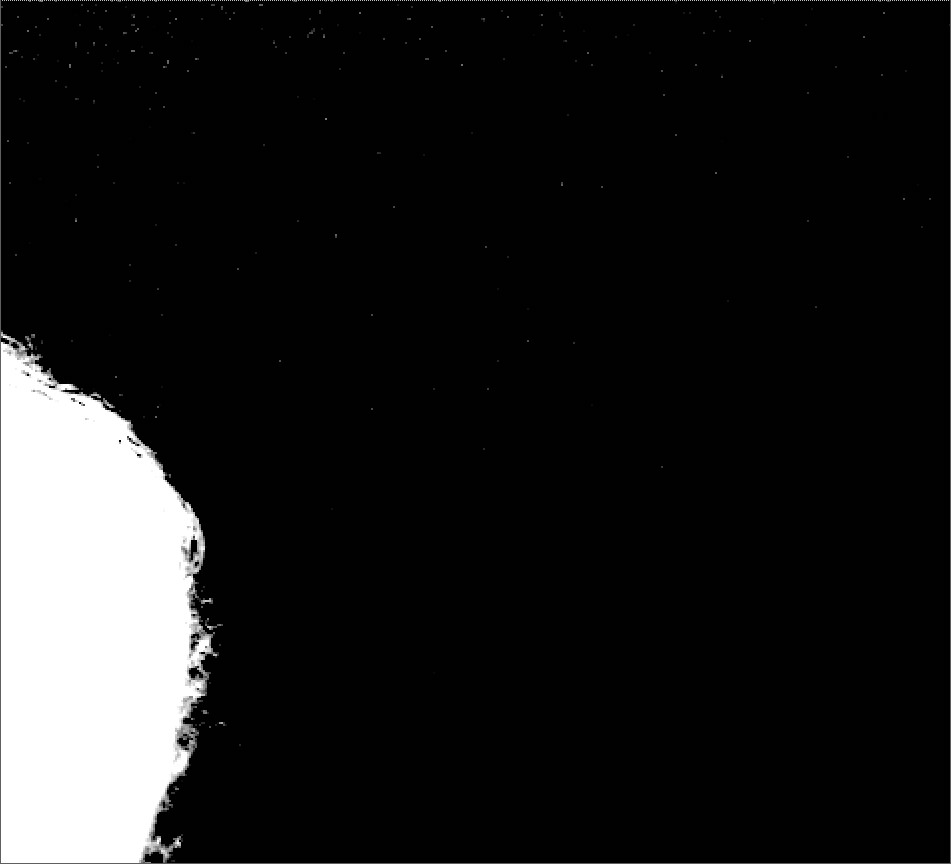 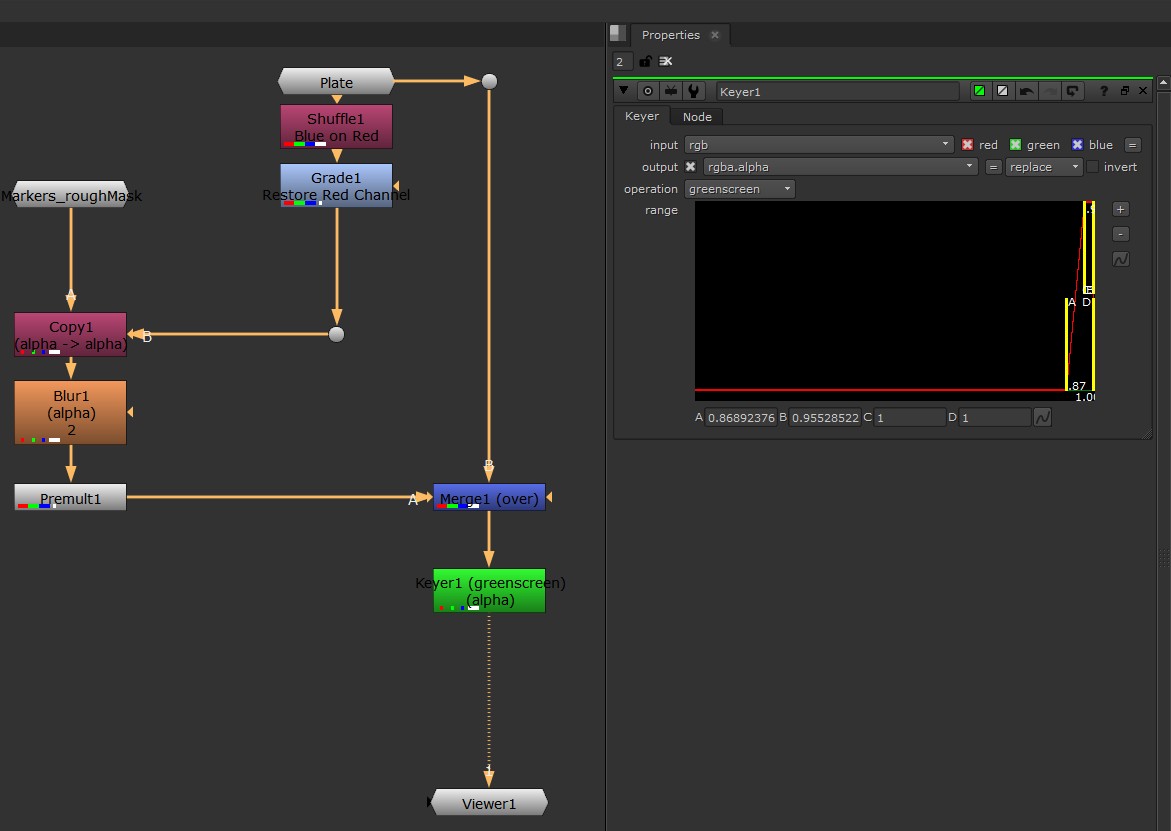 Channel merge this matte with our modified unpremultiplied RGBA using a stencil operation and premult that. 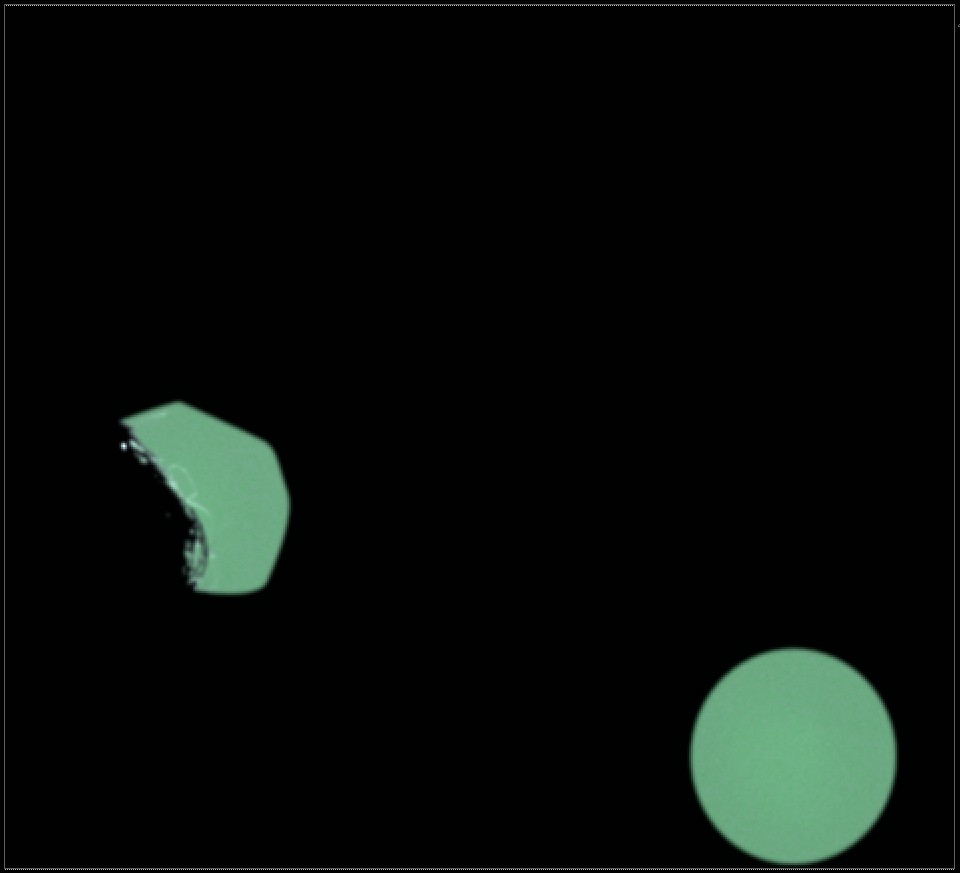 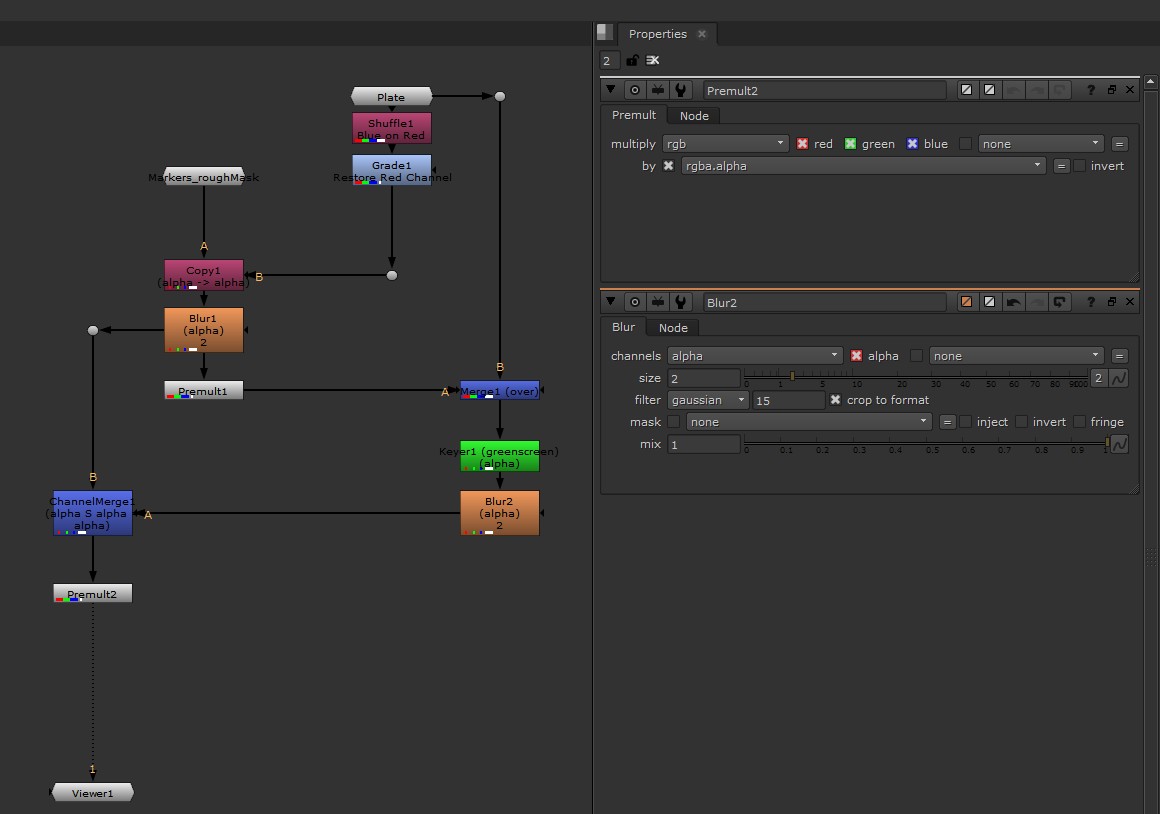 Now we only have a patch, where our markers were stenciled from any intersecting foreground and that can then be merged over our original plate.

Note that you can add some edge tools to refine your screen matte. Here is our final product, the plate is now ready for comp. 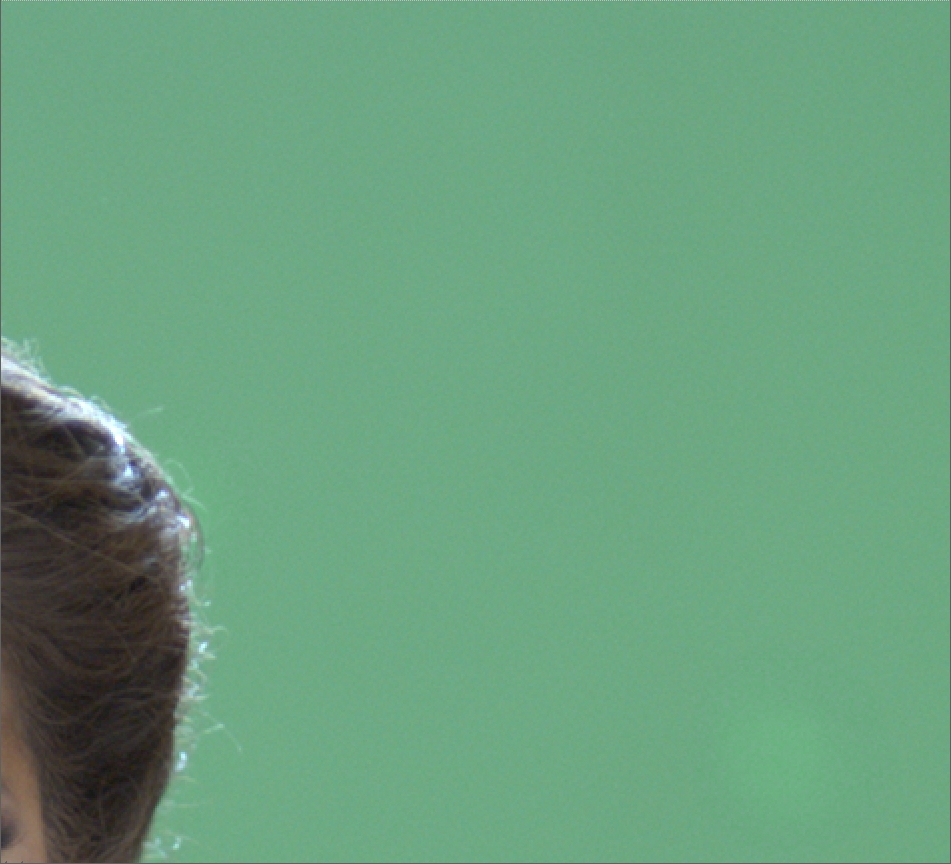 Here is another not as simple example where we have green markers on a blue screen. The markers dominant channel is obviously green but it’s also visible in the red and blue channel.

This time we need to Pre-grade the markers in the red channel to blend in more before we go ahead and shuffle the blue channel to replace the green. Remember this works best if the marker is mostly visible in one channel. 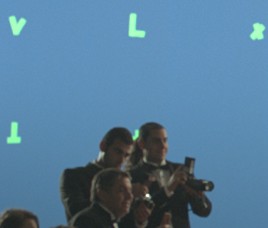 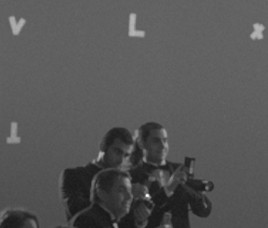 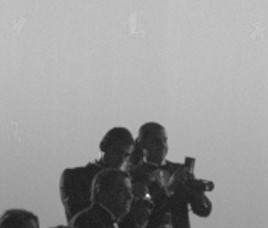 I used a hue keyer to make a mask to feed a grade node where I dialed down the red color. You can also use a hue correct or anything that does the job done. 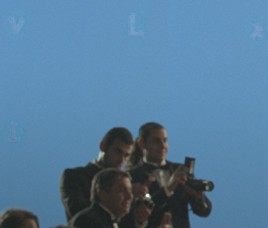 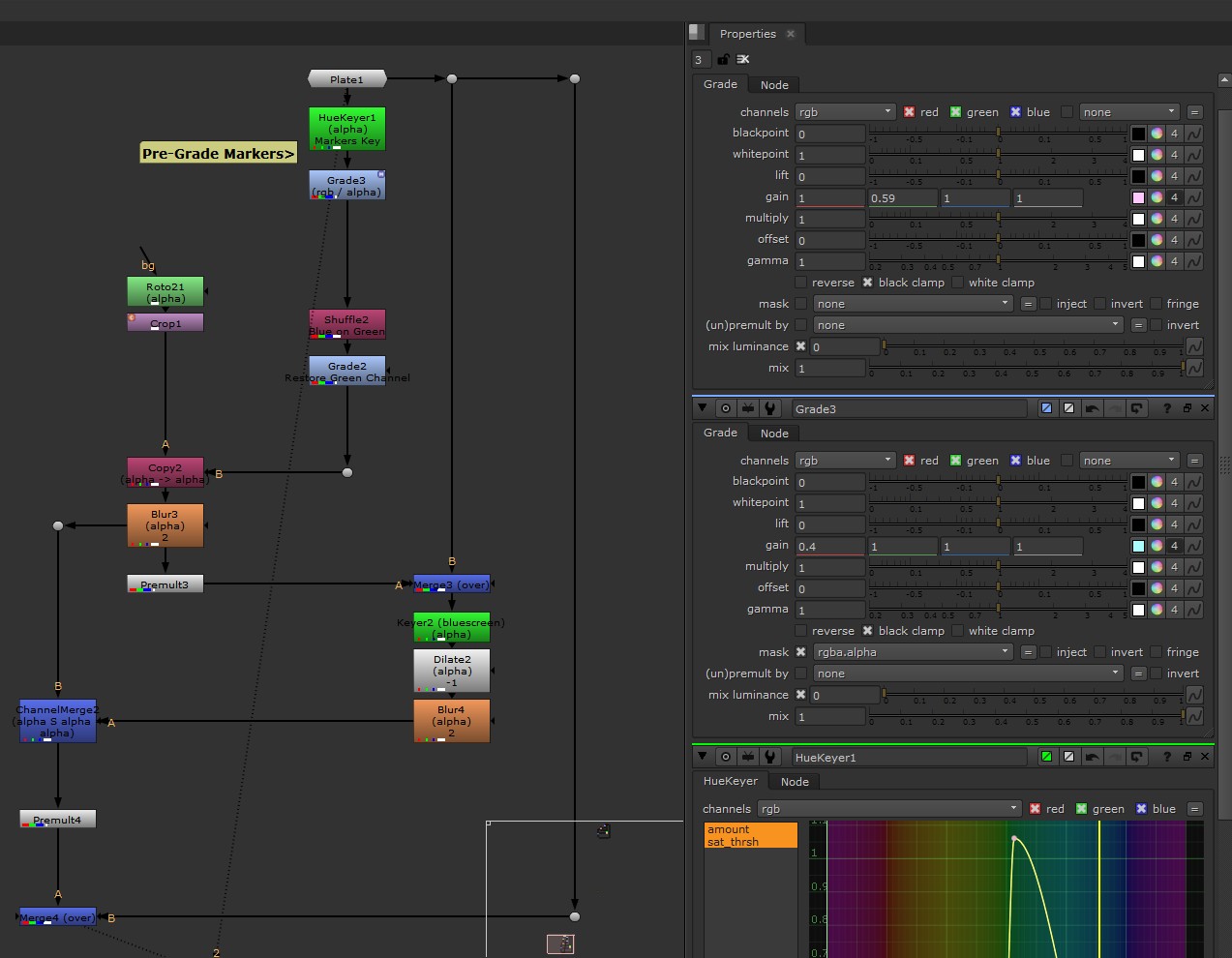 Notice how the marker intersecting with the 3 characters is now gone without loss of detail in their hair. The other surrounding markers are still visible but are mostly blue so they will be easily keyed with the blue screen.

The target is always to focus on the intersecting markers since they are the most difficult to remove.

I put together all this in a gizmo that makes the process easier and works in the steps described above.

We now started to only place orange markers on green screens and pink on blue since they give us the best results. Obviously there will be times when this will not be possible due to a number of elements so hopefully a pre-grade will get us there.