This tutorial will lead you through configuring and using the nuke2backburner submission script.
It was initially developed by Sebastian Elsner at RiseFX. For the purpose of this tutorial i have slightly
modified the original script to ease configuration and setting of default values within the script.

Here is the changelog from the script documenting the things i have changed.

Now let's first take a look at backburner and why you might decide to choose it as your rendermanager.

Features and reasons to choose backburner:

Limitations of the script:

There are several REQUIRED settings to be set/changed in the python script to make it work and a bunch of optional settings and defaults that can easily be set on the top of the script:

TASKLISTPATH = "//storage/Tasklists/"
# TASKLISTPATH is the place were tasklists are saved. It MUST be  accessible by
# all computers taking part in rendering

RENDERGROUPS = "none render10 render20"
# These are global groups created on the backburner manager (you can  create them
# in the backburner monitor). You have to keep the first entry "none" as if it
# is used then the job is submitted to all available renderslaves

You can change these according to your personal needs if you want to. 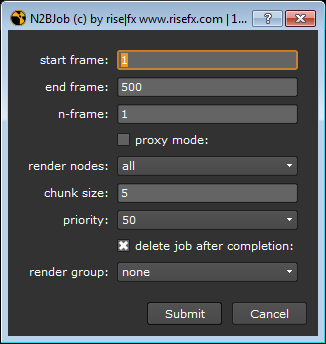 start_frame and end_frame:
Both are pulled from the current scripts' settings on launch and can be edited as needed

n-frame:
Render only every n-th frame. Default can be changed in the  script

proxy-mode:
if on render in proxy mode  render nodes: If you have write node(s) selected you can choose if  you want to render all write nodes or only selected ones

chunk size:
determines how many frames will end up as a single task  in backburner. (Default can be set in the python script. Set to 1 if  each frame should be a task)

priority:
priority of the job. The available priorities can be set  in the python script

delete job after completion:
if on the job will autodelete itself  from the backburner manager after it is completed

render group:
render only on a group of the renderslaves. These can  be configured in the python script. Mind you that the group must  exist as a global group on the manager for this to work. If set to the default of none the job will be  submitted to all renderslaves.

That's all folks. A BIG thank you goes to Sebastian for making the original script available to the public!

0 # Joshua LaCross 2010-08-30 21:39
I'm a little new to the python stuff so forgive me, but I got it working for the most part the only trouble I'm having is, The render nodes seem to be ignoring the task list. The are rendering the project setting range and all 3 of my render nodes are trying to render the same frames at the same time. Otherwise, thanks for the script. I'm sure I'm missing something simple.

0 # Thorsten Kaufmann 2010-09-01 02:03
Sorry for the late reply. I am currently in the progress of moving to a new flat and hence a little "under load". I will try and take a look asap what might be wrong and let you know!

All you have to do is install nuke and make sure the nukepath is on the PATH variable so cmd.exe can find it.
Also you have to make sure to install the same version as the one you submit from.

well in my backburner server windows it says:
Calling 'Nuke6.1.exe ......
Access is denied. (0x5)
Task error: Process cannot be added to job group
Application is down

i also get this error message, and i can run nuke from the cmd promt.

do i have to add a global group even if i'm sending the job via the "none" option?
0 # Thomas Williams 2011-03-17 13:22
I'm using nuke 6.2v1 and having some troubles getting this script to run. It appears in the menu, but when i run it from there, it throws the error
name 'nuke2backburne r' is not defined
i tried to load it into the script editor and run it from there, but nothing seems to happen.
seems like this might be simple to fix, but i'm a python newb so any help would be appreciated.
Thomas
0 # Gary Couto 2011-03-29 09:05
Thanks for putting this together. Awesome script. Very much appreciated.

Could you add the ability to define server assignments and email notification once completed?

Would love the ability to specify just a single server machine or just half of the machines. I'm only asking because you wrote it shouldn't be to hard in your posting. :-D I found it very hard but then again, I'm a python newb.

On my backburner mandager there's a group "nuke" which contains one machine.
Can you help out, or need additional info on the setup.

I managed to fix it, because I had put the nuke2backburner .py in the Nukescripts folder rather than the plugins folder. I'd changed all the links to it, but still didnt work.

Reset all the links and put files into the plugins folder and its working fine.
0 # paolo bertoni 2011-12-20 11:00
HI, I'm using the script with NukeX 6.3v4 and Backburner 2008.1.1 and looks like both pc (using windows 7 64bit) are rendering the same frames:
for the first frame one pc gives the error "can't rename .tmp to final" than starts rerendering the file, overwriting the job that the other pc has already done.
can you help me please?
looks like they're not getting the correct task
0 # paul charmoille 2014-01-14 10:29
In case someone is having the same error message on a render farm you have to replace the "%%" on the command line job parameters by "%" (or just put %tp2 and %tp3).

It will solve the task dispatching in backburner.
0 # siam shukoor 2012-06-26 02:51
Backburner job could not be submitted, error code: 2
See nuke terminal for details.