A fairly common question among Nuke users is whether transformation nodes concatenate in Nuke, which nodes do and don't, and how can one tell.

The subject can be particularly confusing for artists who had used Shake before and liked the way it gave a visual clue of nodes that were concatenating.

So, hopefully, the following guide will shed some light on how concatenation is handled in Nuke, from the very basic concept to some not-so-obvious cases, and help people come up with the best strategy to apply multiple transformations to an image.

Q. Basics first, please. What is a concatenated transformation, and why should I care about it?

Usually you'll want to preserve that ability, and avoid breaking concatenation wherever possible, in order to get the best quality and performance out of the transformations you apply to an image.

Here's a very basic example of a concatenated versus non-concatenated stack of transforms: 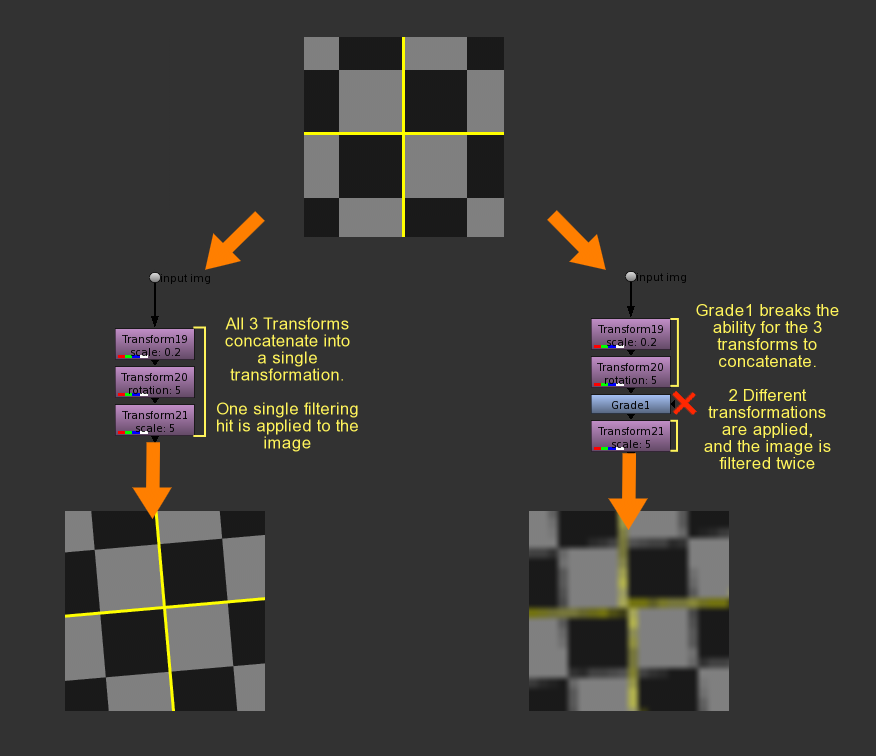 Q. Ok, so do all transformation nodes concatenate? How can I tell?

Most of them do, but not all of them.  Since Nuke provides no visual aid to help us what nodes are concatenating, the best, fail-proof way to check if something is concatenating is to try breaking it (by adding any non-concatenating node between the others) and checking the results :)

However, it is useful to know which ones do and don't, and under what circumstances.

If we look at all the nodes from the "Transform" tab in the nodes toolbar, we can divide them into 3 categories:

A. Nodes that concatenate both UPSTREAM and DOWNSTREAM
You can combine any nodes from this group in any order, and they will concatenate together. (Ex. Transform, CornerPin)
B.  Nodes that concatenate ONLY with other transforms UPSTREAM, but not downstream
Usually you'll want to use these only at the end of a transformation stack. These are nodes that are capable of concatenating with other transforms upstream, but will stop concatenation at this point in the tree.
It is actually quite amazing that some of these nodes have the ability to concatenate upstream in the first place (Ex. STMap, GridWarp, ScanlineRender), but there's one side effect to be aware of: when concatenating with nodes that have motionblur ON

C. Nodes that DON'T concatenate, even if they're in the "Transform" menu.

This can be misleading, but some nodes from the Transform menu will NOT concatenate, and will in fact break concatenation when used between other nodes that do concatenate. The easiest way to identify these nodes is the fact that they don't have any filtering options. (Ex. Position, Mirror)

Q. How do I know which node belongs to each of those groups?

There's a list of nodes for each category further down in this document, but generally you can use this rule of thumb, which will make it a lot easier than having to remember what's the behaviour of each node.

There's 2 notable exceptions to this rule:

- the TransformMasked node ONLY concatenates upstream, even if it does have motionblur knobs.

Q. What happens when I have multiple transform nodes with different filter settings?

If you have a set of nodes that concatenate together, the last node is the one that sets the filter that will be applied to the whole transformation. 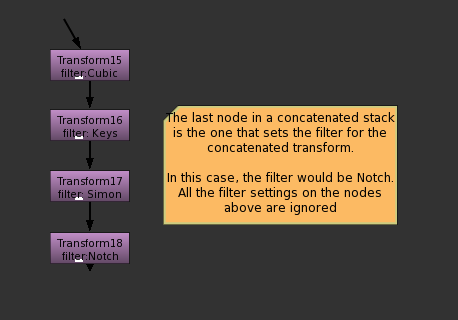 Also worth mentioning, if your last node has motionblur turned on, then none of the filtering options have any effect, since motionblur will force the transforms to use a special algorithm/filter for motionblur.

Q. Is there anything else that will prevent nodes from concatenating?

Yes. Even with nodes that normally concatenate, certain combinations of motionblur settings can break concatenation.

There's 2 basic rules for this behavior:

This is probably easier to see with a visual example of the different combinations: 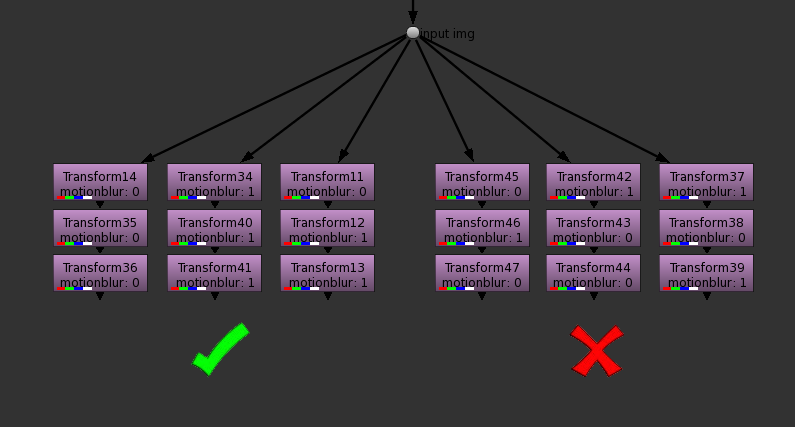 2. CONCATENATION BETWEEN 2D AND 3D TRANSFORMS

One really cool feature that's worth highlighting is the ability of geometry to look up its texture while preserving concatenation with 2D transforms connected immediately above it. (Thanks to Frank Rueter for opening my eyes to this a long time ago!)

This means that, on a standard 3D setup as the one below, you could be scaling down your texture using 2D transforms, and then get really close to the textured object again through the render camera, and it would all happen within a single filtering hit. 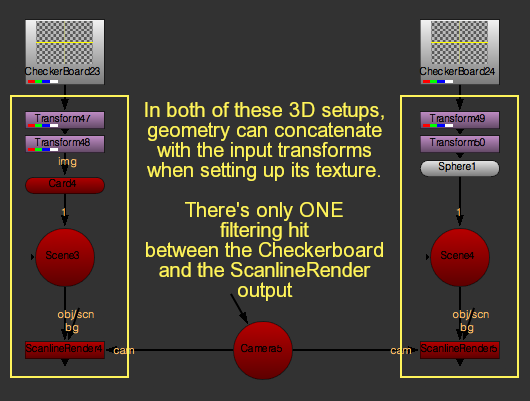 This is a feature that doesn't get a lot of press, but is indeed very powerful. This ability to concatenate with input transforms is even preserved through Shaders, which means it'll still work if you're texturing your object using a projection, for example... 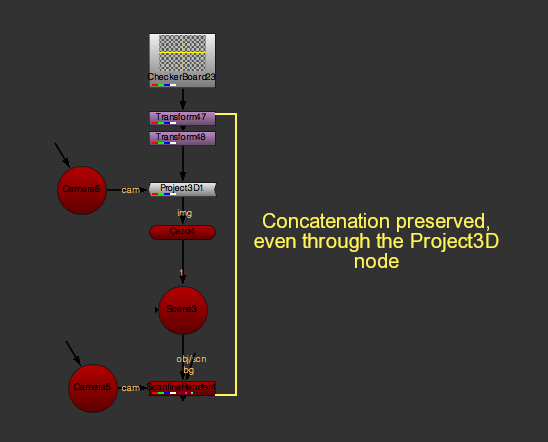 ... or even for more than one input through a MergeMaterial node! 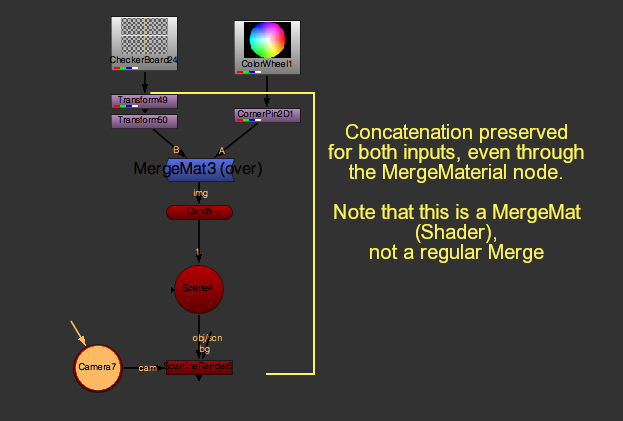 For reference, here's a list of the different nodes that appear under the "Transform" menu on a standard Nuke install, based on their ability to concatenate transformations with other nodes.

* Note: Dot, NoOp and Switch nodes are not transformation nodes themselves, but it's worth noting that they will not break concatenation.

Yes, you're right. Switch nodes don't break concatenation either. I just edited the final list for the sake of completeness. Thanks for pointing it out.

However, I still don't understand why a simple merge node breaks a concatination of 2D transforms...
When you want to apply a matchmove (with a tracker node for example) to several elements moving thanks to a set of transform nodes and you want all this to concatinate, you've got to place a tracker after each set of transform instead of a single one after a merge of all this.

It's a great feature but at first use it's almost impossible to layout a collage using it, as there is no quick and easy way to view the resulting 'merge'.

Is there a better way than connecting the MergeMat to a card, moving the card back in space and using vals:Card2.z and panning/viewing through a locked default camera?

I know what you mean. It is unfortunate that MergeMat doesn't have a way to toggle between "shader mode" and "regular image merge mode", as it would make situations like that much easier.

Plugging into a card that's locked to a camera view is one way to view the result of MergeMat, but you can also keep a separate stream using regular merges, where you lay out, transform, etc. all your textures as you would in 2D. Then simply replace any Merges with MergeMats.

"but there's one side effect to be aware of: when concatenating with nodes that have motionblur ON"

Thanks a lot
+1 # Frank Rueter 2016-05-01 22:30
No it doesn't. You can use the window translate, scale and roll in the camera though to apply additional transforms that will not incur an extra filter hit
0 # Daniel Mermelstein 2016-11-17 18:05
I couldnt have SplineWarp concatenate either upstream or otherwise... anything im doing wrong ? Thanks
0 # nikolai michaleski 2017-10-02 19:19
Question. Will the concatenation of transforms be taken into account with the motion blur? Say I have transform A with a 100px movement in X and then Transform B has a 100px movement in Y. How do I get motion blur to process the transforms together to produce a single 45 degree blur rather than two opposing 0 and 90 degree blurs?

Hope this makes sense.
+1 # Jimmy Chen 2019-04-19 15:24
Thanks this amazing stuff above...!!!
What I discover that new version Nuke has two versions of Mirror node, the new Mirror node can be concatenation up and down stream! great update!
0 # Daniel Dupre 2020-11-20 06:14
Awesome article.
Refresh comments list
RSS feed for comments to this post